When somebody asks me what is Australia’s national food or dish, I find it a little difficult to answer. We’re a multicultural country, with many nationalities and cultures which add diversity to our cuisine. There is no question that the food is wonderful in Australia – but if you’re wondering what are some of the classic Australian foods then this post will help. 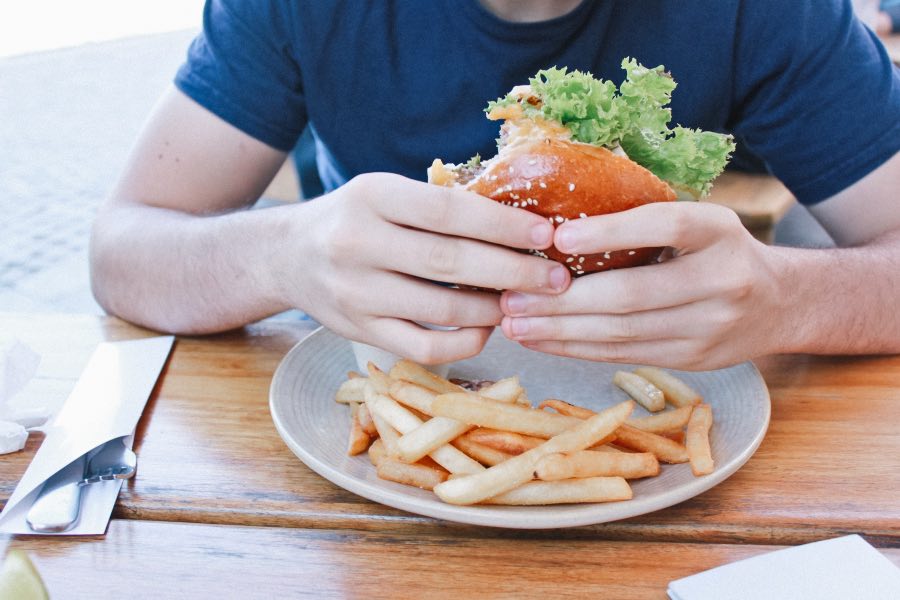 This hugely popular Aussie meal won’t go down in history as being the most flavoursome thing you’ll ever eat. But, it is oh so satisfying and comforting.

If you ask me, the classic chicken parmigiana (it’s no surprise we’ve shortened its name to just chicken parma) is best served from the kitchen at an Aussie pub. Also, it tastes best alongside a pot of cold beer. 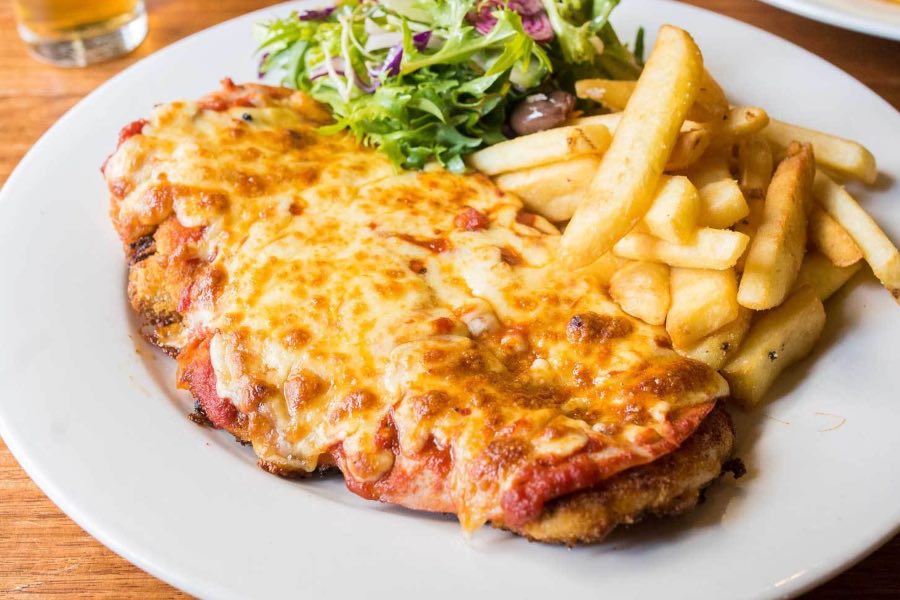 A chicken parmigiana is a chicken fillet, bashed a few times to flatten it out, and make it bigger. It’s then prepared by dusting in flour, egg wash and covered in breadcrumbs and then shallow fried in oil.

Once it’s golden brown, it’s covered with a homemade tomato sauce and mozzarella cheese, then grilled until it’s melted. Sometimes a piece of crispy bacon or a few slices of ham is added to the mix too.

A chicken parma is usually served with chips and salad. Take it from me, this is going to be a super filling meal – so arrive hungry!

This is THE classic Australian food that you must try while you’re here. Don’t waste your time and try just any meat pie, ask a local where you can find a great pie. They’ll most probably direct you towards a bakery, small cafe, or corner store.

An Aussie meat pie is a savoury meal and it’s most popular at lunchtime. If you can get one that has just come fresh from the oven, you’re in luck. 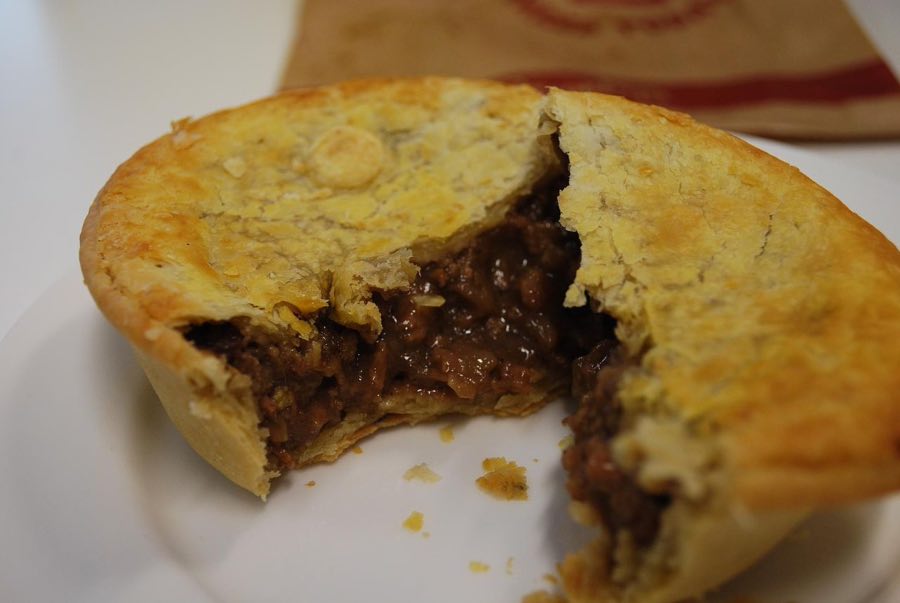 There are many fillings to choose from, yet the most common is minced beef or chunks of steak with gravy. For the adventurous, the standard fillings of steak often come with onion, pepper, or mushrooms too.

Nowadays, fillings for pies are becoming super fancy! Think lamb and rosemary, roast chicken and vegetables, and even Indian-style buttered chicken or lentil and spinach too.

I have to admit it, we cook fish and chips pretty well in Australia. It makes sense that it’s on our list of classic Australian foods.

We’re a country that is completely surrounded by the ocean, so the fish is usually freshly caught that day. 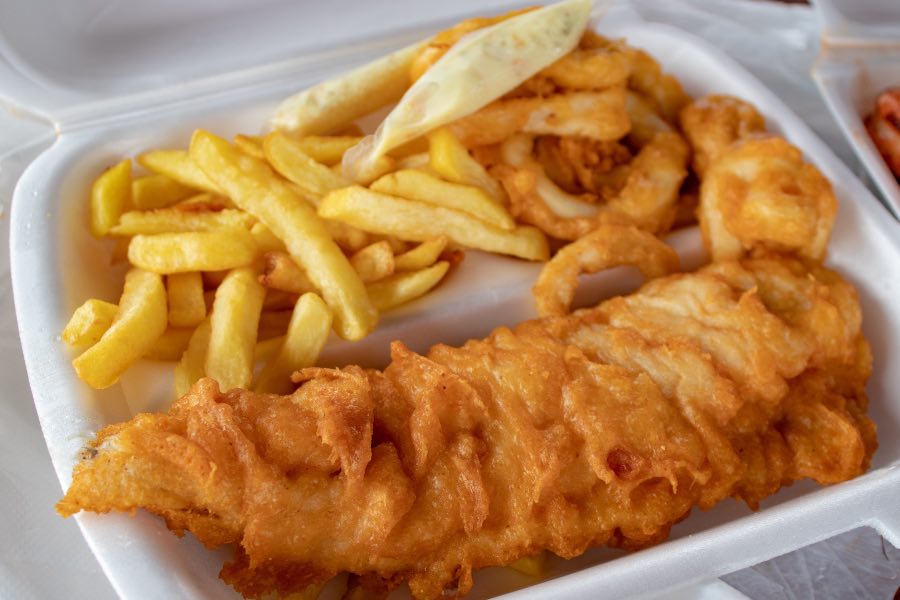 There’s nothing better than going for a weekend away to one of the smaller coastal towns or these The 8 best beaches in New South Wales in Australia to order fish and chips, then enjoy it on the beach. You can unwrap your meal right there and enjoy it as you watch the sun go down.

Just watch out for those cheeky seagulls! (sea birds in Australia).

Your fish will typically be battered and deep-fried. If you prefer it grilled, you can ask the shop to prepare it this way instead, no worries. If you really want to pimp out your first Aussie fish and chips experience, order a few fried dims sims and potato cakes too.

You either love it or hate it, but most Aussies have grown up with this stuff and we love it! No visit to Australia is complete without having tried vegemite at least once.

So what is vegemite? It’s a dark paste made from leftover brewers yeast extract with different vegetable and spice additives. It’s kind of similar to marmite in the UK, but let’s not get into that debate between Brits and Aussies about which one tastes better; we’d be here all day. 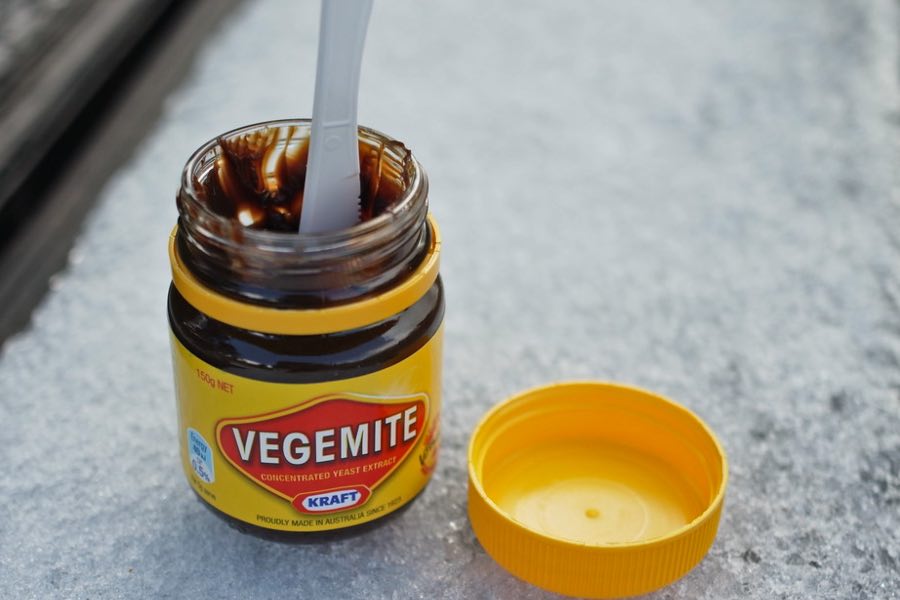 Perhaps the MOST classic Australian foods – Vegemite. I LOVE it!

The most popular way to enjoy vegemite is on toast with loads of butter. You can also spread it on bread or even dry biscuits too. The secret here is in the application of the vegemite.

Don’t overload your toast with too much of the stuff. It can be a little overbearing as the flavour is quite savoury and a little salty.

I’d recommend a ‘dabbing action’ and apply it in small amounts. Once you’re on board as a ‘happy little vegemite’ (the initial ad campaign in Australia for marketing vegemite to the nation, listen here), you’ll be adding it to other food too.

I eat vegemite with melted cheese, and avocado, I sometimes add a small spoonful to stews and sauces to add depth of flavour.

Vegemite can be purchased from any supermarket in Australia in a number of different-sized jars. We love the stuff so much that they also produce it in a travel-sized tube to take it on holiday.

You can always spot an Aussie at the breakfast buffet carrying the bright yellow tube of vegemite. 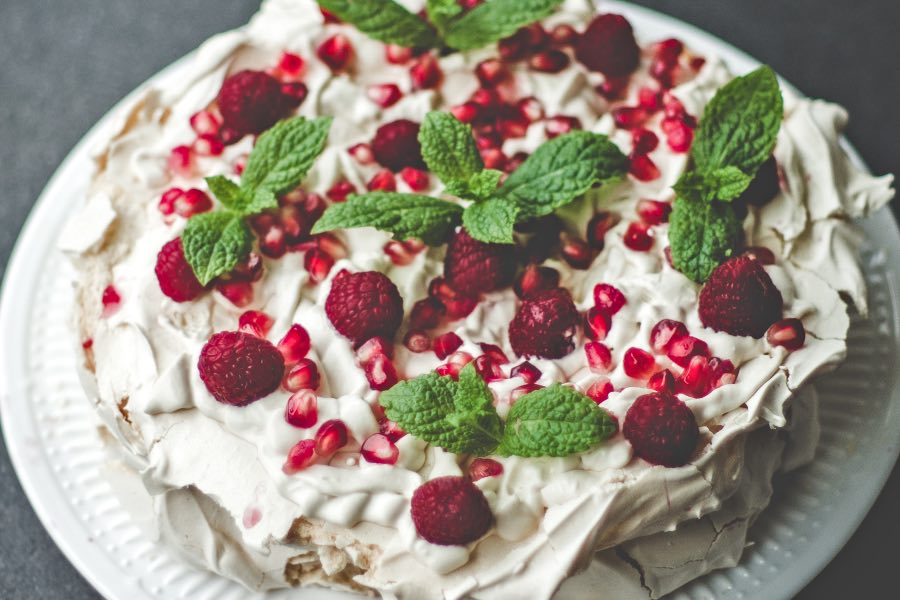 Both Australia and New Zealand lay claim to being the creators of this famous dessert. It’s usually Christmas time or special occasions when you’ll see this eye-catching delight adorn the kitchen table.

Sausage rolls are another lunchtime favourite and the best ones can be found in small family-run bakeries. A sausage roll is made of minced sausage meat, wrapped in puff pastry and baked until perfectly golden. You know you’re onto a good thing when the pastry is nice and flaky.

I’ve eaten some of the best sausage rolls in Australia in Cairns, Queensland. Check out my post on the 12 best cheap eats in Cairns.

Sausage rolls have really kicked it up a notch over the past decade, with so many new flavour creations. I’m talking flavour combinations such as lamb, rosemary and pine nuts or feta, spinach and pumpkin and pork and fennel, to name a few.

Add a dollop of homemade chutney to your sausage roll or just stick with the standard tomato sauce on top. Don’t miss this classic Australian food during your visit.

When we ask for a burger with the lot in Australia, we’re asking you to load it up with abs