Leptis Magna should be the 8th Wonder of the World. Once upon a time, this was the largest and greatest Roman city in Africa and despite years of neglect, it still is. As you walk through what’s left of it today, you can still imagine the life the Romans must’ve lived. With its opulent baths, temples, two forums and elaborate decorations. 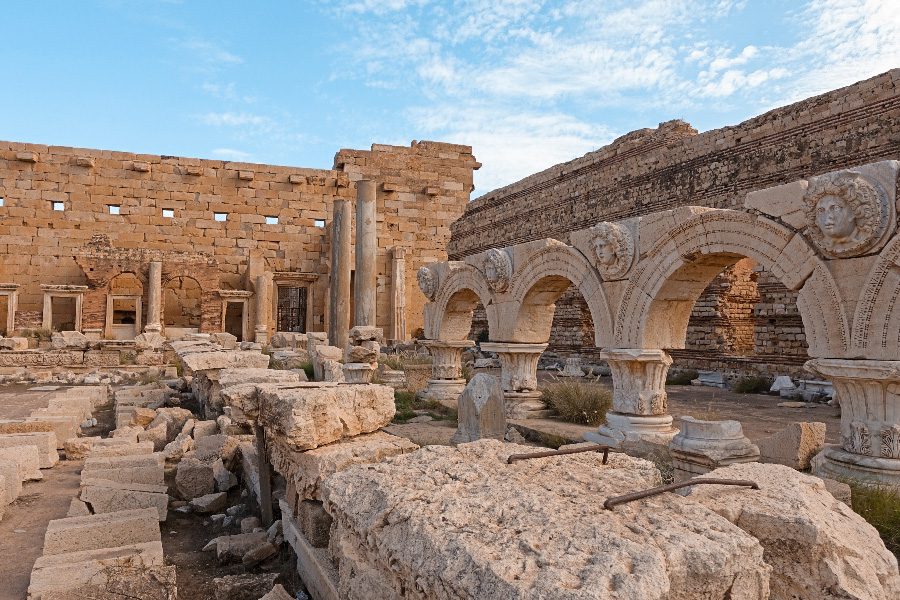 Leptis Magna was founded by the Phoenicians and then conquered by Rome, the city was the birthplace of Septimius Severus, who rose to become emperor from 193 AD until 211 AD.

It was during this time the city really prospered and many structures were built.

Leptis Magna was a highlight when we visited Libya in late 2021. Exploring this ancient city takes time, but be sure not to miss the best places.

6 Incredible places to see when you visit Leptis Magna

This one has been hollowed out of the hill by the Romans, essentially using the slope to build part of the structure into.

You can still find cages for the animals and according to archaeologists, you could seat 18,000 spectators here. 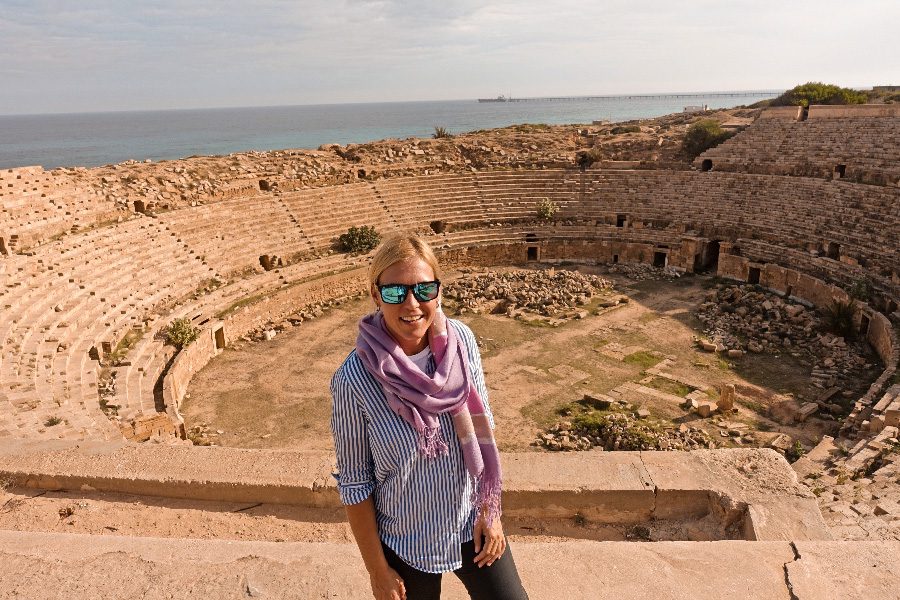 2. The Arch of Septimius Severus

As you enter the main area the first thing you’ll see is the arch dedicated to Septimius Severus. It dates to the 3rd century but it has been restored to its former beauty.

Dedicated to Septimius who was born in Leptis, he had a massive impact on the city’s development during the Roman time. Hence why an arch was built and named after him.

Check out the details on the columns, you will find eagles – the symbol of the Roman Empire. 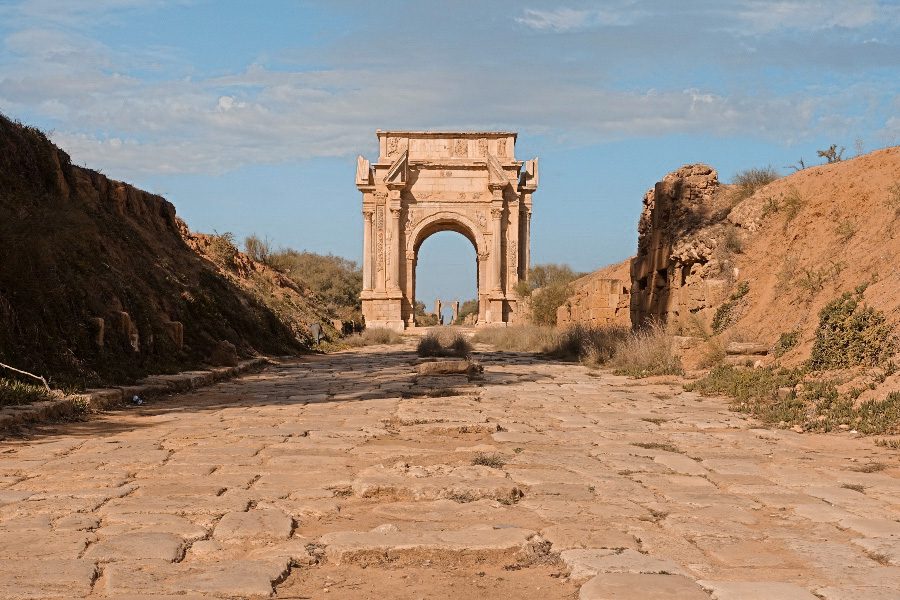 By far some of the best-preserved Roman Baths in the world can be found in Leptis Magna.

They were truly a social hub of the city. Designed to lay along the north-south axis with exceptional symmetry, the baths included a sports ground, open-air swimming pool, the frigidarium (cold room), changing rooms and sweat baths (sauna).

You can still see the terracotta pipes that were built to carry the steam from the furnaces and heat up the baths. Incredible.

The floor was paved with marble and mosaics were also used to decorate the roof. 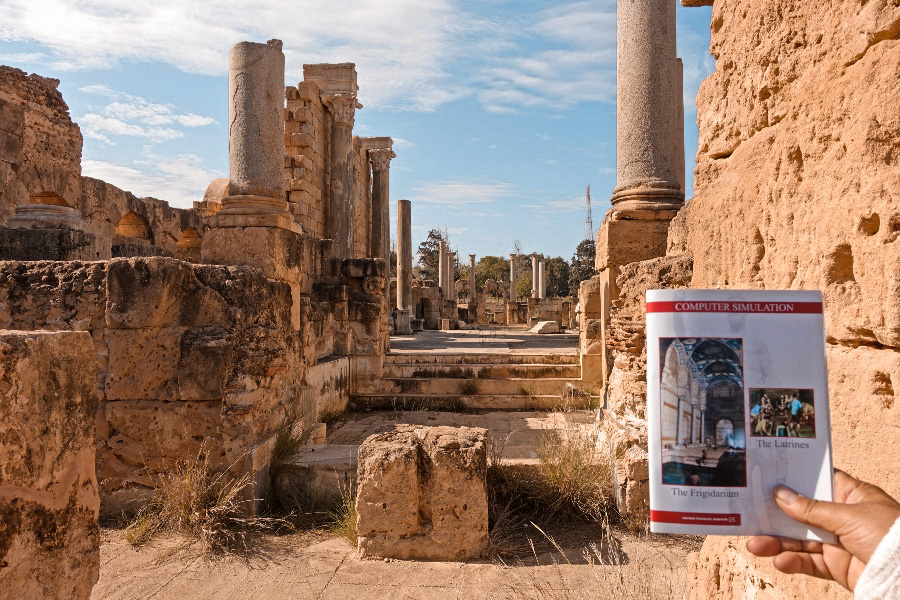 Leptis Magna had two forums and the Severan is the one you want to see. The open-air Severan Forum measured 100m by 60m and its floor was covered by marble.

As you walk through it you will see pieces of columns and arches that crumbled away with time but you can still imagine what was like during its heyday.

Some arches are still standing and you can see the heads of Medusa carved from marble used as decoration.

The Basilica at the end of the forum had restricted access but you can peek through the gate to see small carved statues of Hercules decorating the main facade. 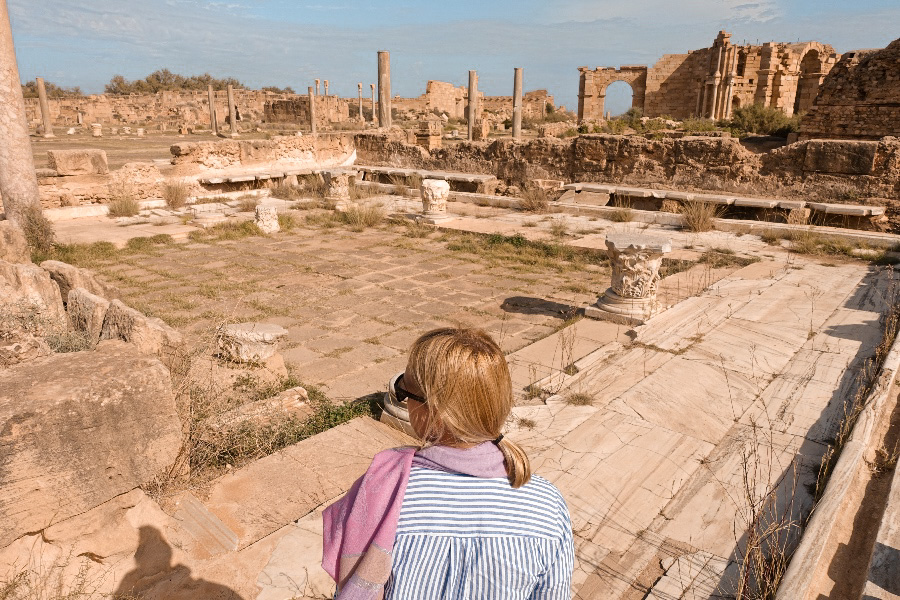 Public shared toilets as a social hub? Yes, you can find them here. The Romans were exceptional engineers so it comes as no surprise that they built latrines in their city.

Essentially marble seats with a hole in the middle and a small gutter for freshwater, life was very social here. 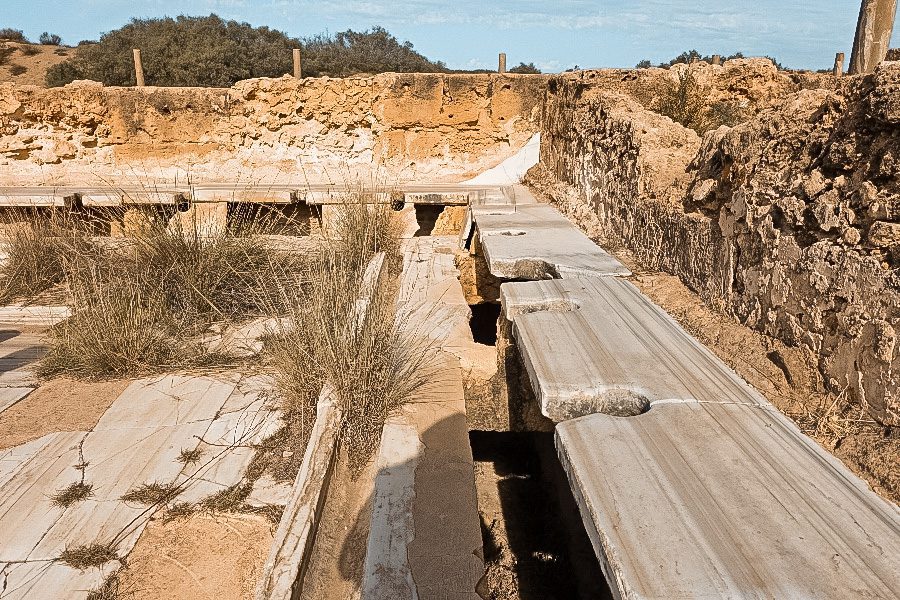 Leave this one to the end when you visit Leptis Magna.

Leptis Magnas’ theatre is one of the oldest stone theatres anywhere in the Roman world and is the second-largest surviving theatre in Africa (after Sabratha).

It dates to 1st-2nd AD. It’s believed that the stage was decorated with hundreds of statues and sculptures of gods and emperors. Only two remain now: Hercules and Liber Pater. 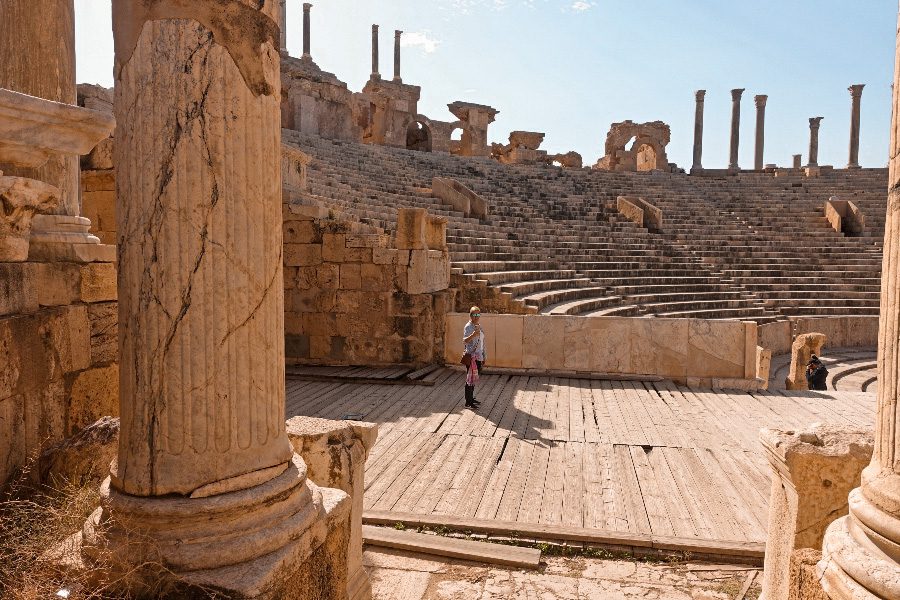 The design of the theatre amplifies any sound from the centre of the stage – we have tried this ourselves.

When you stand exactly in the middle just before the stage, your voice will echo across the entire theatre.

And when you walk up to the top and look down, you get the see the Mediterranean Sea as the backdrop. 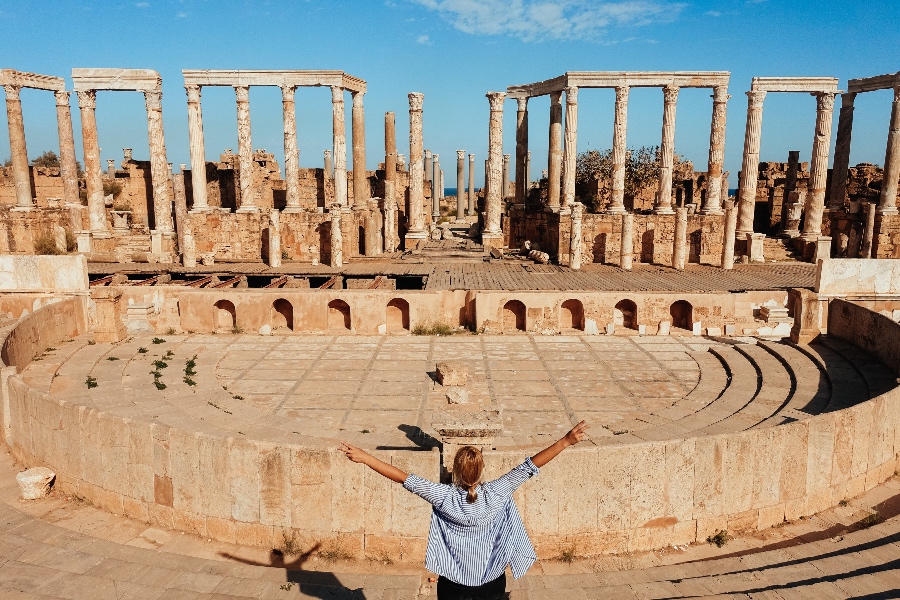 Leptis Magna – The Theatre from above

Without a doubt, Leptis Magna is one of the most impressive and best-preserved ancient Roman cities I’ve ever seen.

A definite highlight from my visit to Libya – one of the world’s least-visited countries.

Some other ancient ruins that I’ve enjoyed have been when I visited Algeria, and Tunisia has some impressive ruins too, in particular, the amphitheatre of El Jem, and Carthage (which you can find on our perfect 14-day itinerary for Tunisia).

If you are planning on visiting Libya, you need to research your options. We can recommend the company we travelled to in Libya with here, in our post about how to visit Libya. You can find more useful information in the post too.

We really enjoyed Libya cuisine, and these 10 most popular foods in Libya were fantastic!

If you do make it to Libya, why not travel to Tunisia before or after your trip? This fantastic country is just next door and it has so much to offer!

We have some helpful posts about exploring the Medina in Tunis and 5 unique things to do, plus 8 of the best street eats in Tunisia.

Don’t miss our 10 best tips for independent travellers to Tunisia.

Interested in knowing what the most popular dish is in every country in Africa? Our Food Map of AFRICA has them all! 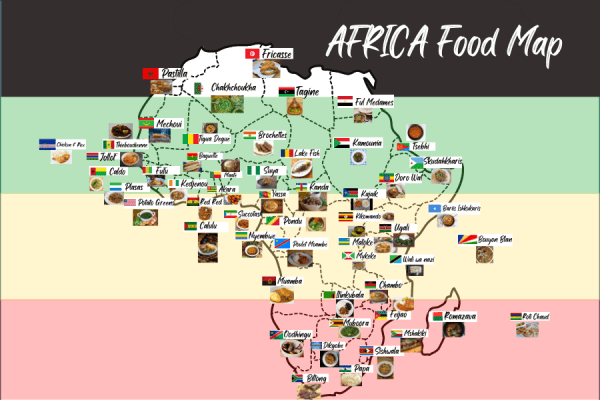 Check out our AFRICA Food Map!