Food in Ukraine – 10 Most Popular Dishes

There are many things to love about this nation and the food in Ukraine is one of them. Ukraine is the second-largest country in Europe (after Russia, which isn’t entirely in Europe) yet it feels like one of the most underrated. Discover centuries-old cathedrals, stunning architecture, hearty food and a rich agricultural tradition. Its fertile soil produces tremendous amounts of grain including wheat, barley and corn to name a few. No wonder it’s known as “the bread basket of Europe”. 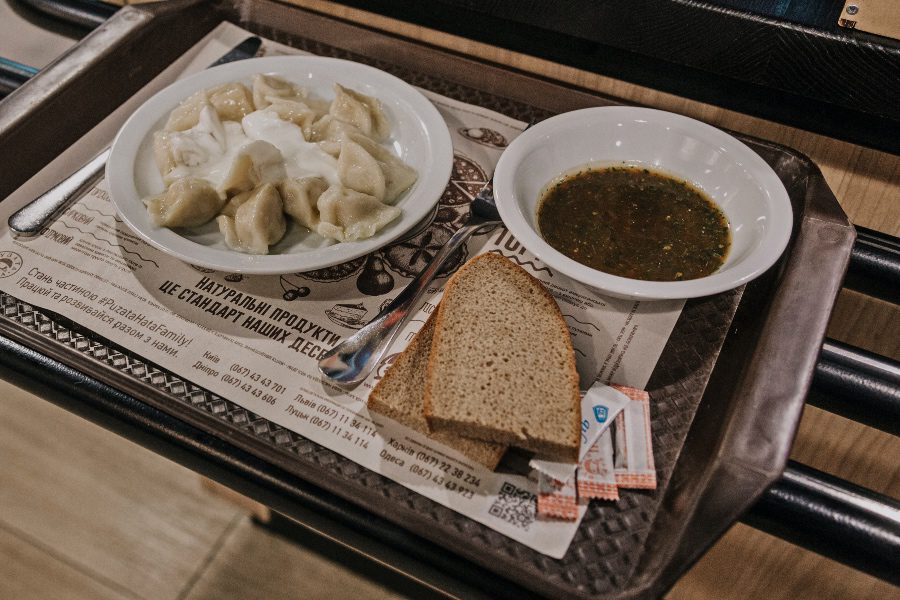 The good news is that fantastic food in Ukraine is found all over the country. Here are 10 dishes you must try when visiting this delicious part of the world.

Let’s learn more about the food in Ukraine

Varenyky is best described as a type of dumpling. It is made of dough, while the fillings are quite diverse and can be both savoury and sweet. The most common fillings are cottage cheese, mushrooms, cabbage, meat, potato, or cherries are the most typical fillings.

Ukrainians are known to add sour cream to many of their dishes, and it works perfectly when added to Varenyky. 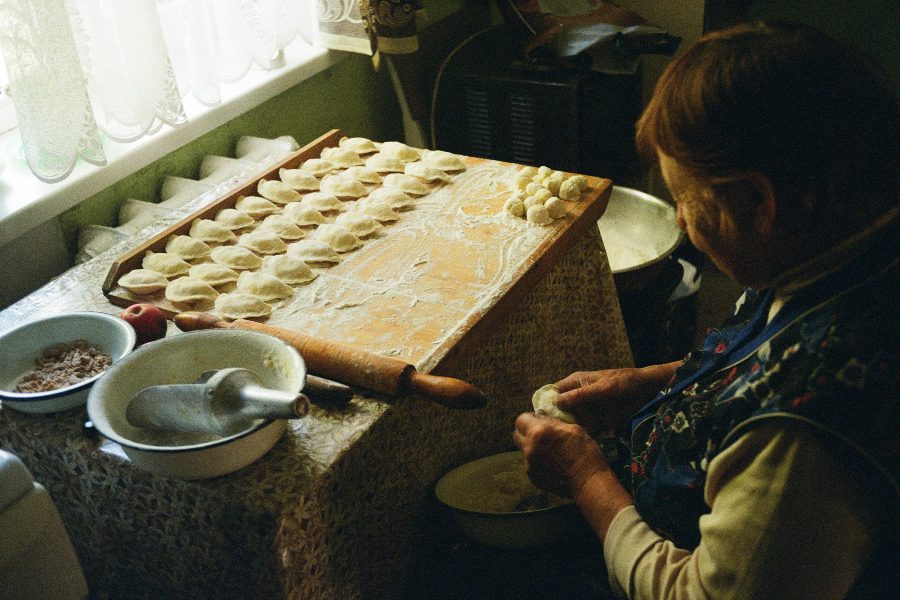 Delicious dumplings filled with a variety of ingredients. I LOVE this food in Ukraine.

These are Ukrainian cheese-filled crepes. Baked in generous amounts of butter and flavoured with fresh dill, nalysnyky are sinfully good.

This dish is relatively versatile and will often be served for special occasions.

Many Slavic countries have their take on potato pancakes, and they’re all quite similar.

Essentially, they’re made by finely grating potatoes, adding egg, a little flour, salt and pepper to taste and any other herbs you wish to add flavour.

Simply fry the potato pancakes in vegetable oil until golden and enjoy! Perfect eaten on their own, but remember this is food in Ukraine, so you need to slather it with sour cream!

So much better! I ate many of these when travelling to the 10 best places to visit in Slovakia, a country which borders Ukraine and produces some of the best potatoes in the world.

But whatever you do, don’t confuse it with Slovenia – they’re different countries.

So, what are the differences between Slovakia vs Slovenia? 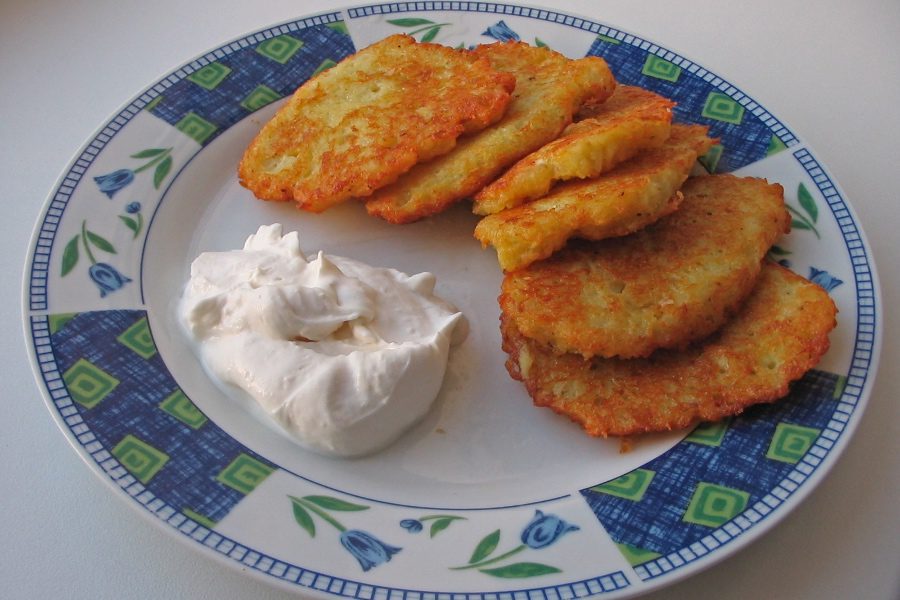 You’re probably familiar with the name of this soup already as it’s hugely popular in Russia and Poland and the surrounding region. Ukrainian borscht is a classic hearty soup, perfect for the cold winters.

It is packed with chunks of tender beef and pork in addition to an array of vegetables such as beetroot, celery root and cabbage and fresh dill. Food in Ukraine doesn’t get much better than this!

Borscht is a filling, enjoyable soup, with a unique sweet and sour flavour. Don’t forget to add a big dollop of sour cream to the soup before devouring it. 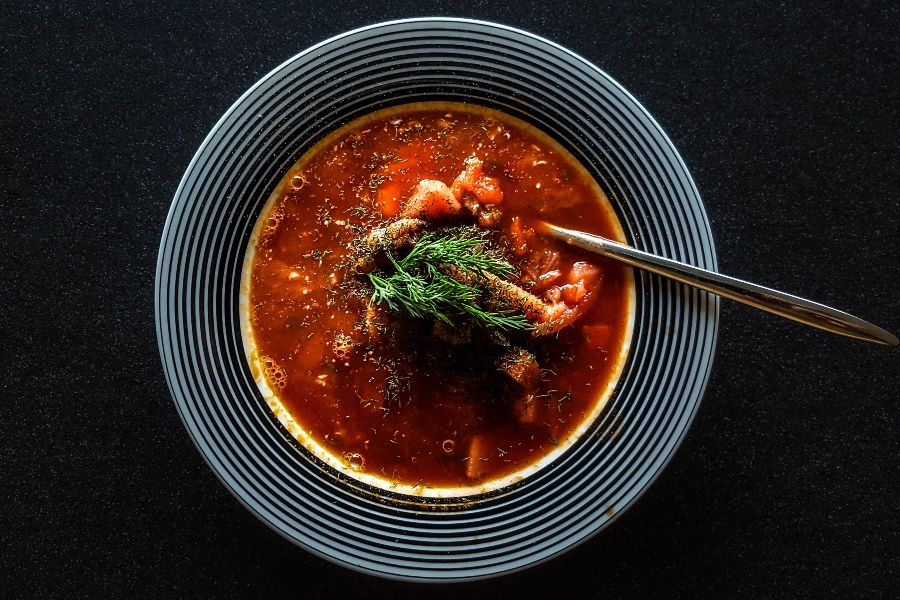 Borscht soup. A national favourite and tip of the list of best food in Ukraine!

Salo is a creamy slab of cured pork fat that contains little to no meat. It’s popular in European countries like Poland, Russia, Slovakia, Hungary, Czechia, and Lithuania to name a few.

It’s a very popular food in Ukraine and is usually served as an appetiser.

Salo can be eaten raw (which always surprises international visitors) or cooked (salted, boiled, smoked, fried) and is the perfect accompaniment to a slice of rye bread.

You may find this ingredient in other Ukrainian dishes like borscht, deruny, and varenyky. 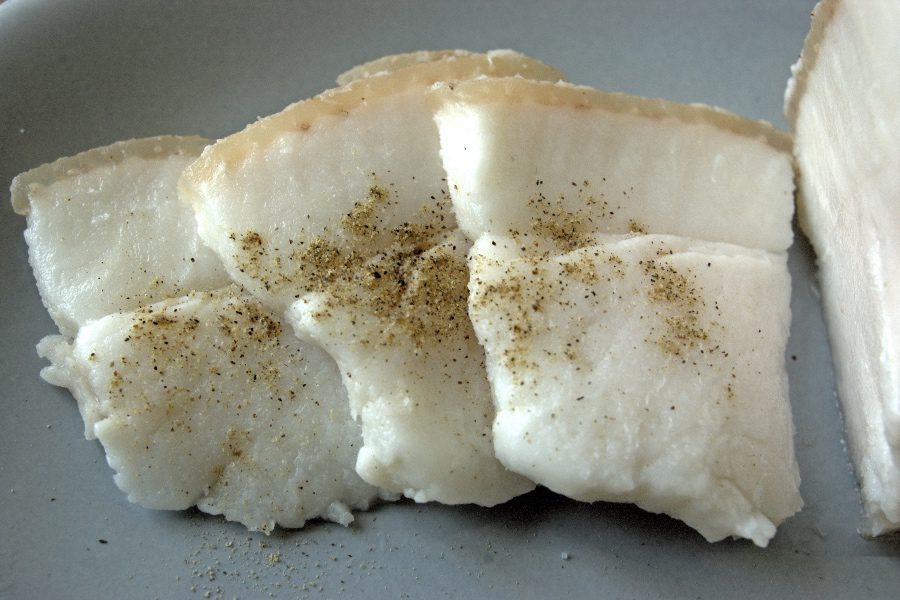 Food in Ukraine that you should try is Salo. It tastes better than it looks. Photo Credit: en.wikipedia.org

Eggs and peeled potatoes are boiled and cut into small cubes. Meat and pickles are also cut into cubes and added to the mix, along with mayonnaise.

Juice from the jar of pickles is added for flavour, plus salt and pepper to taste. Some recipes include cubed carrots and canned peas.

As I mentioned, this is simple food in Ukraine, but it’s one of the best potato salads you’ll try. 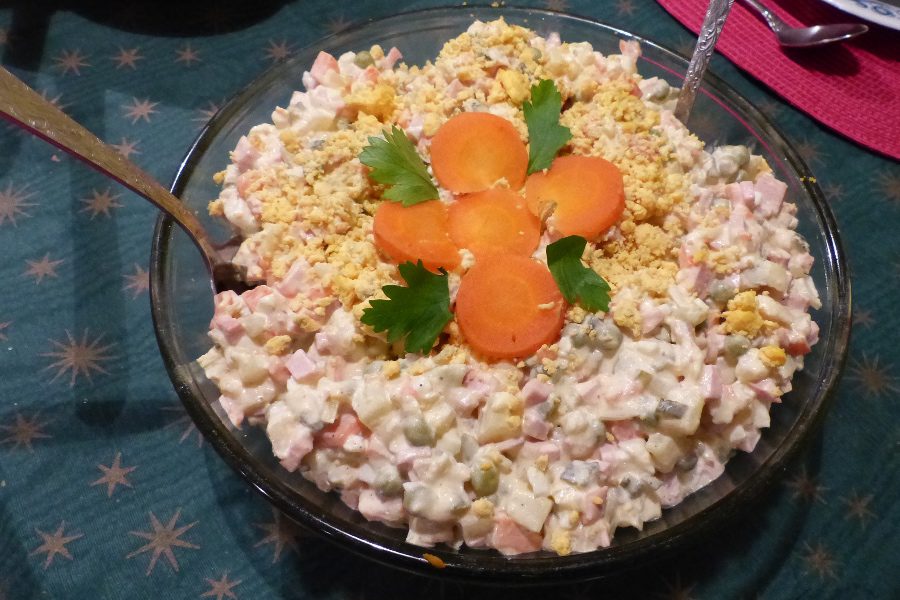 This is another one of my all-time favourites. Holubtsi is cabbage rolls filled with rice, meat, pork cracklings, fried onions, and spices. Some regions of Ukraine make a filling with cornmeal, others use buckwheat too.

Holubtsi is often prepared in large quantities and eaten for several days afterwards.

If you ask me, it’s always better the next day. Enjoy with a dollop of sour cream or yoghurt on the side. Delicious!

This is a very popular dish consumed in many countries in Central Europe, the Balkans, and the Middle East. The best cabbage rolls I’ve ever eaten were during a trip to North Macedonia.

Check out my 8 Top North Macedonian dishes you need to try. 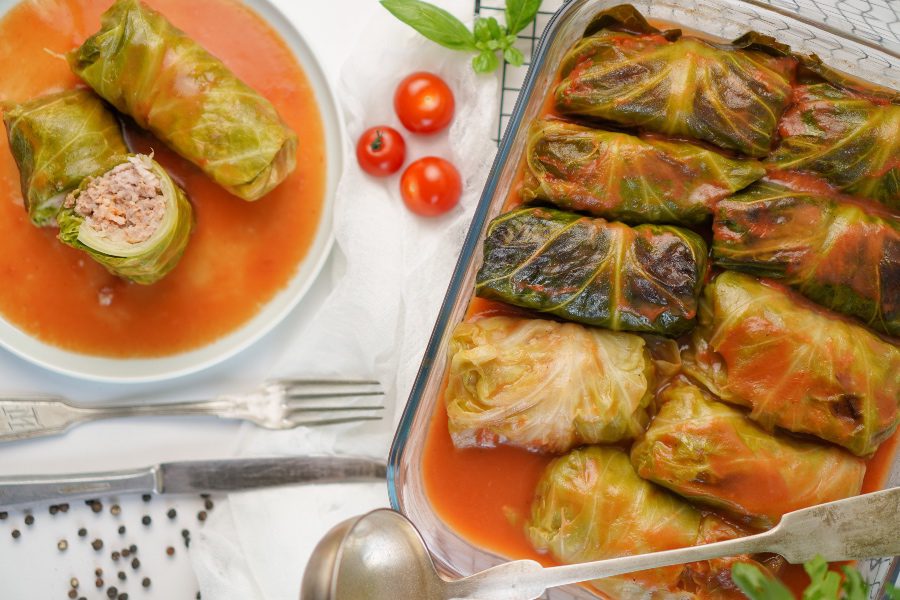 There are variations of cabbage rolls in other countries. And yes, they’re all fantastic!

Pampushky is a Ukrainian bread roll made of yeast dough from rye, buckwheat or wheat flour. They can be baked or fried and savoury pampushky doesn’t contain any filling.

They’re typically seasoned with garlic sauce and traditionally served with borscht soup. The flavour of the garlic compliments the sweetness of the beets in this delicious soup.

You can find sweet pampushky in Ukraine too. Common fillings are berries, poppy seeds, or fruits that are in season. They’re topped with powdered sugar before serving. Pampushky is my favourite sweet food in Ukraine, so don’t miss them!

This food in Ukraine is more commonly found in the Carpathian region, and Western parts of the nation. Banush is made of fried pork fat, cornmeal, and bryndza cheese.

The traditional method of cooking is over a fire, to impart a smokey flavour. It’s typical for porcini mushrooms to be added to the porridge, to create an even richer flavour.

I’ll admit that this food in Ukraine doesn’t look so appealing, but it’s definitely tasty. 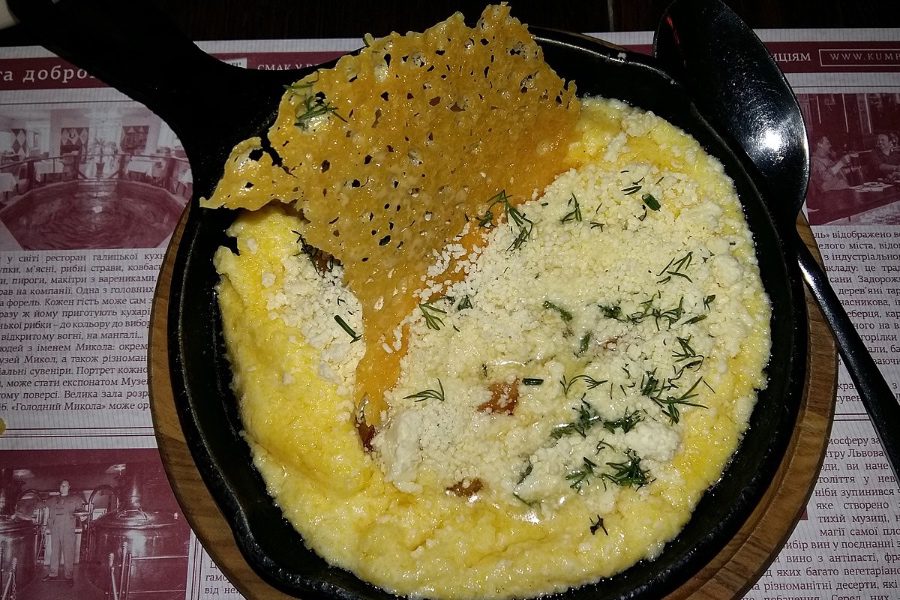 The Ukrainian homemade sausage is made of meat, salo (pork fat), and spices for flavour. This combination of garlic, spices and minced beef or pork meat, plus the pork fat is then wrapped in casings.

The sausages can then be fried, baked, grilled, or boiled. My favourite way to enjoy Ukrainian sausage is simply with some bread and mustard. 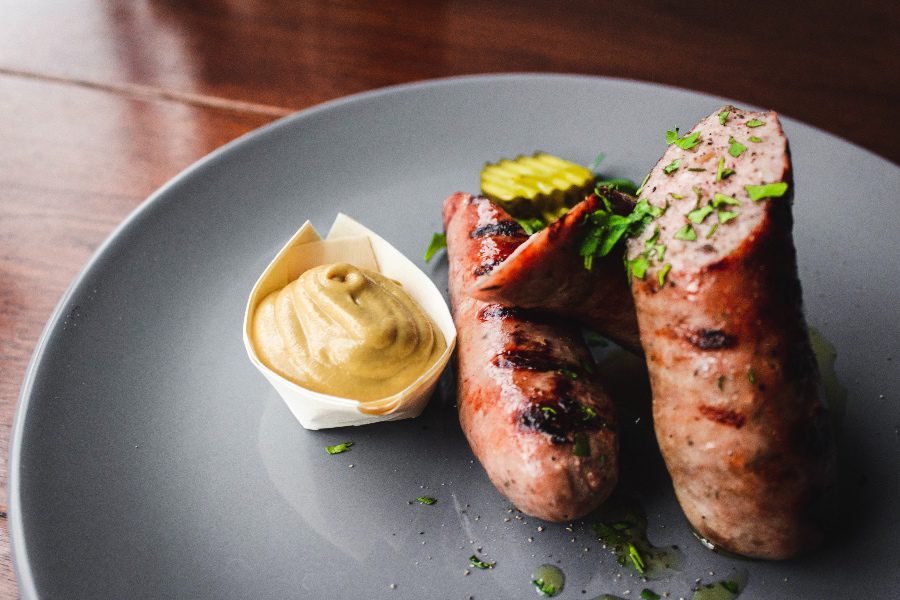 Homemade sausage. Food in Ukraine that everybody loves.