How do they get so much flavour into their meat dishes? What’s the secret recipe for the best pastries ever? We figured the best person to provide us with knowledge and answers regarding Serbian cuisine was a local food lover. Eager to have a hands-on food experience during our visit to Serbia, we did our research and found the best cooking class in Belgrade. 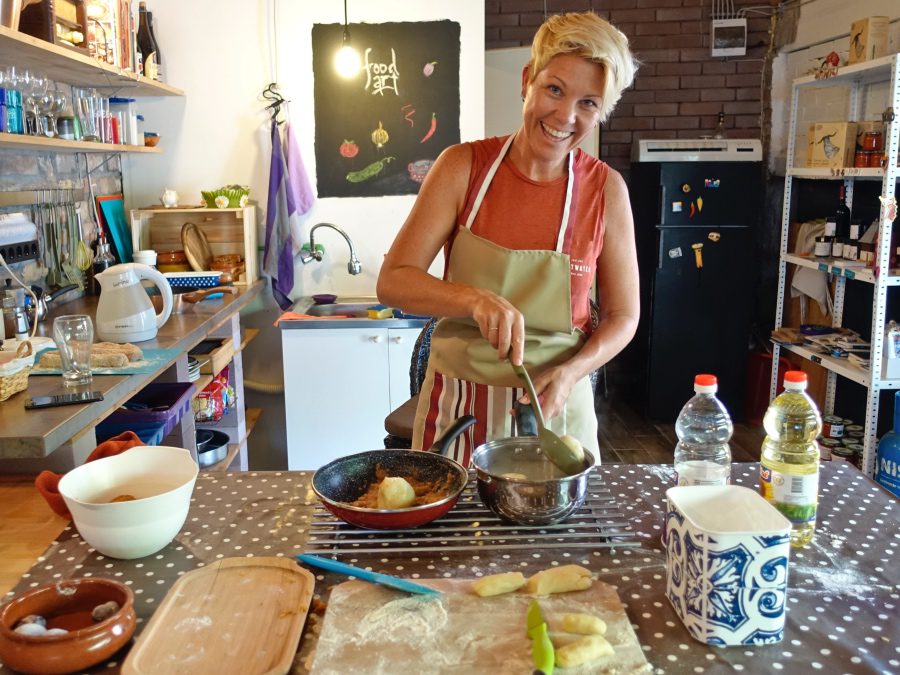 Before our cooking class in Belgrade, let’s visit the markets

We met Vlad, our food-loving host in Zemun, a very cute, bohemian part of Belgrade. Within minutes of jumping off the local bus, we adored this colourful little town with cobble-stoned streets, small street-side cafes and locals going about their day. There wasn’t a tourist in sight – this was perfect.

Vlad walked us through the local food markets to buy some fresh ingredients for the day. The produce was so vibrant and fresh. Vendors stood proudly behind their stalls, carefully polishing tomatoes and apples to entice more buyers.

After carefully choosing the foods we needed for our cooking class in Belgrade, we moved on towards a small bakery close by the markets. 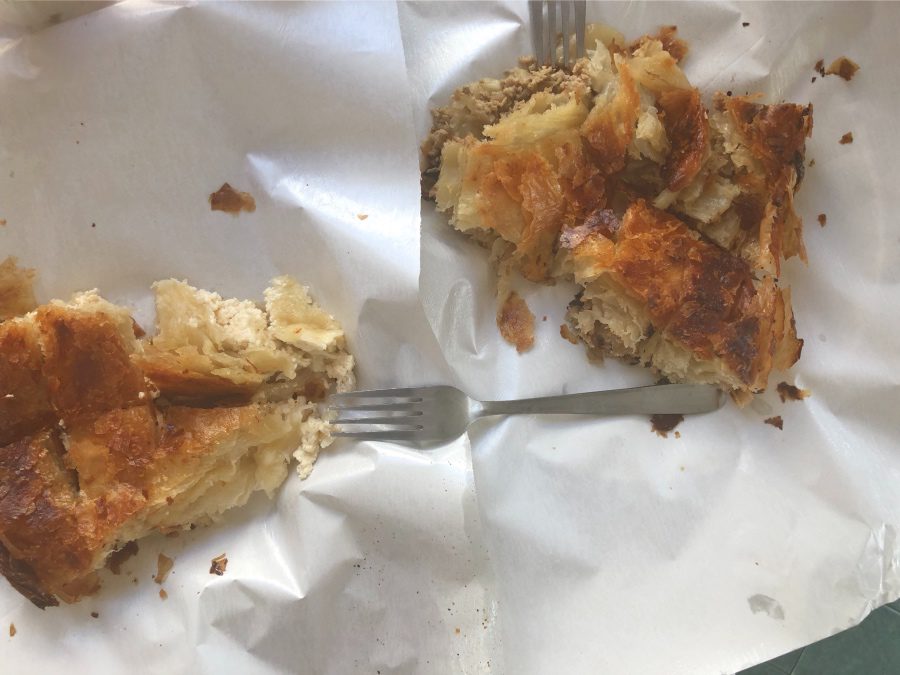 Vlad chose two kinds of borek (pastries) for us to try. We shared one filled with cheese, the other full of spiced minced meat. Borek is the most typical Serbian snack, available at any time of the day.

Locals commonly eat it with a side of drinking yoghurt, so this is how we enjoyed it too. I’ve eaten many of these pastries in a few European countries, however, I must admit that these were definitely up there with the best!

We continued towards Vlad’s home where our Serbian cooking class in Belgrade was to take place. We were welcomed into the green garden area at the rear of the house where we sat down in a comfortable shaded area. I noticed a fresh fig tree, herbs and a grapevine filled the yard.

Vlad offered us tea or coffee, and of course, we chose coffee. Serbians make great coffee, short and strong.

After chatting with Vlad over coffee, we moved into the kitchen where everything had been set up for us to start preparing food and cooking!

We started preparing the salad, we’d dress it later on when our main meal was ready. We sliced some onions, sprinkled them with salt and massaged this into the onions. On top of the onions, we filled the bowl with big cubed pieces of cucumber and tomato. This went into the fridge for later.

Next, we peeled a couple of large brushed potatoes, cut them up and put them on the stove to boil as these were to be used in the dough for our sweets later on. 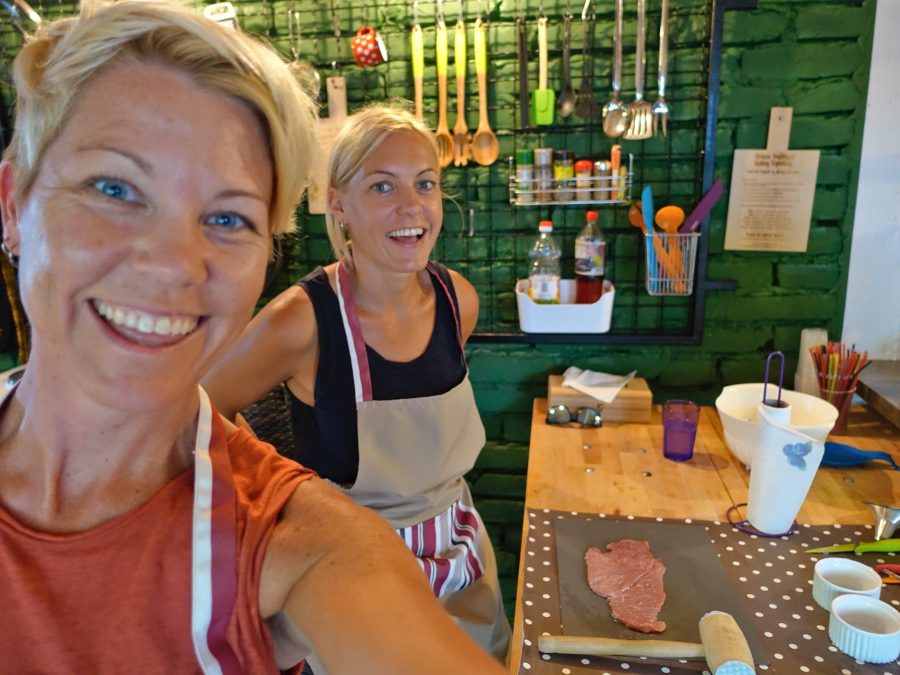 Marty and I are ready to cook!! 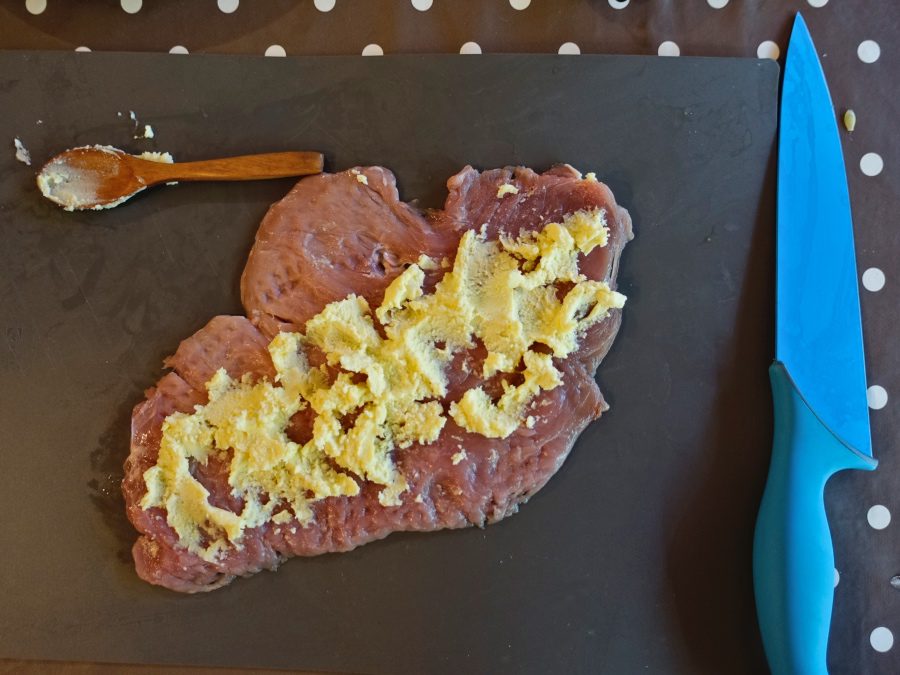 Preparing the schnitzel. Kajmak cheese stuffed inside – ready to roll.

In the markets earlier, Vlad had asked the butcher to slice us three thin cuts of pork fillet. We each took a piece and bashed it out with a mallet, then spread the meat with kajmak cheese (an ingredient used in many Serbian dishes).

Carefully folding the meat in, we rolled it and sealed the schnitzel with a little egg yolk. Into the flour, bathed in some egg mix and finally rolled in breadcrumbs, these guys were ready. 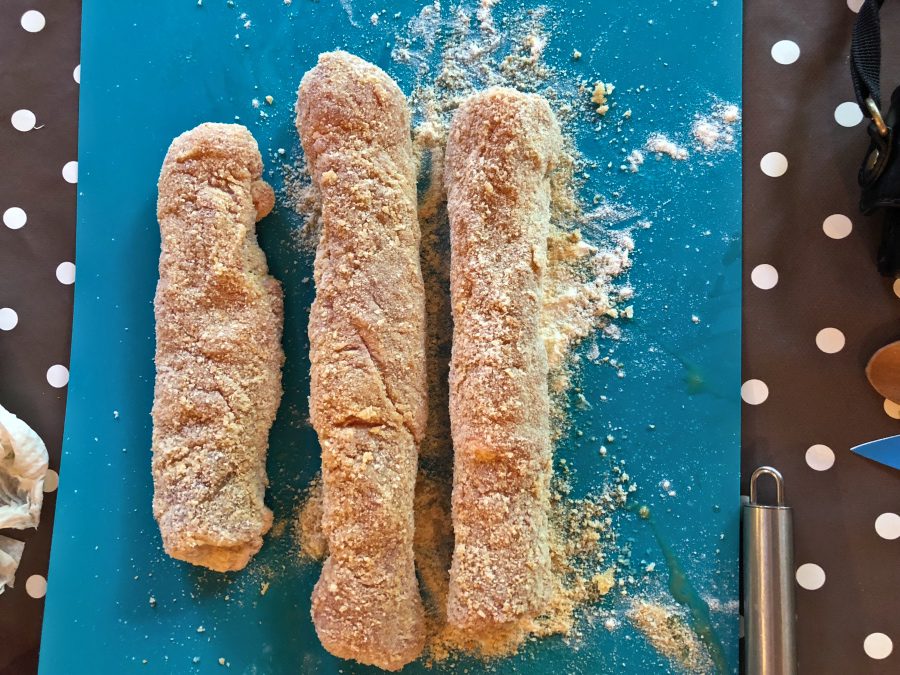 Cevapcici has always been something I’ve enjoyed eating, however, I’ve never prepared and cooked them before. What’s the secret to making cevapcici? Vlad’s recipe for preparing the meat includes adding some bi-carb soda and a touch of mineral water to the mix of minced meat.

The meat used for this dish typically includes 1/3 minced pork and 2/3 minced beef. The secret is that you’ve got to knead the meat for at least ten minutes.

I’m told that cevapcici is best when the meat has rested in the fridge for at least 2-3 hours or even overnight. 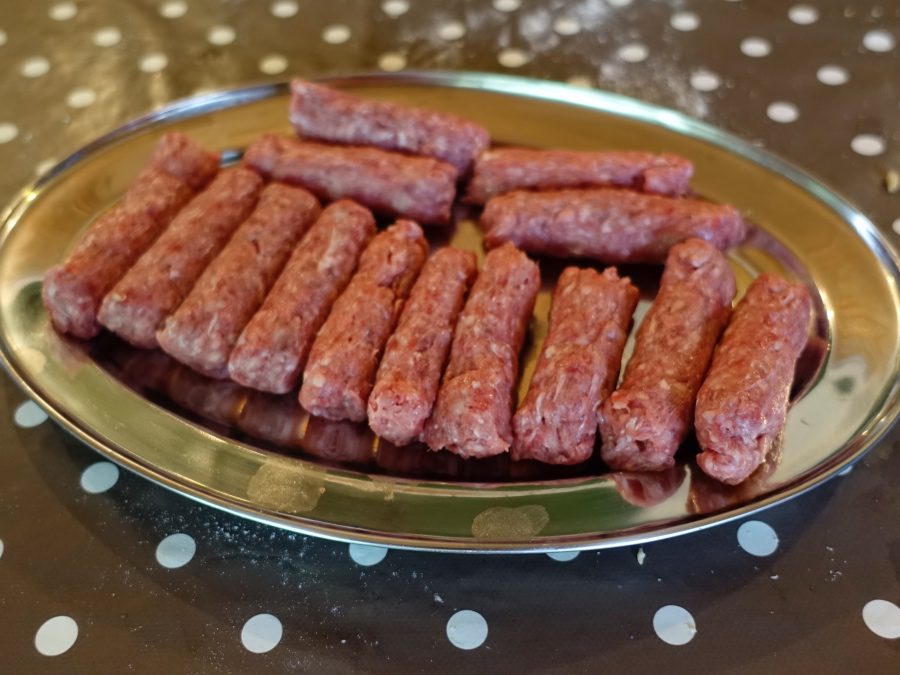 To prepare the sausages, Vlad gave us a small metal utensil, it looks similar to a funnel. You simply push the meat into the funnel until it starts to form a long sausage out of the spout. Then we cut them to size and that’s it.

The last thing to prepare was the dough for our plum dumplings. Yum! I could already tell that these were going to be good. We mashed our potatoes and added a tablespoon of lard (which can also be substituted with butter). Gradually we added some flour until we had a good consistency to knead out some dough. 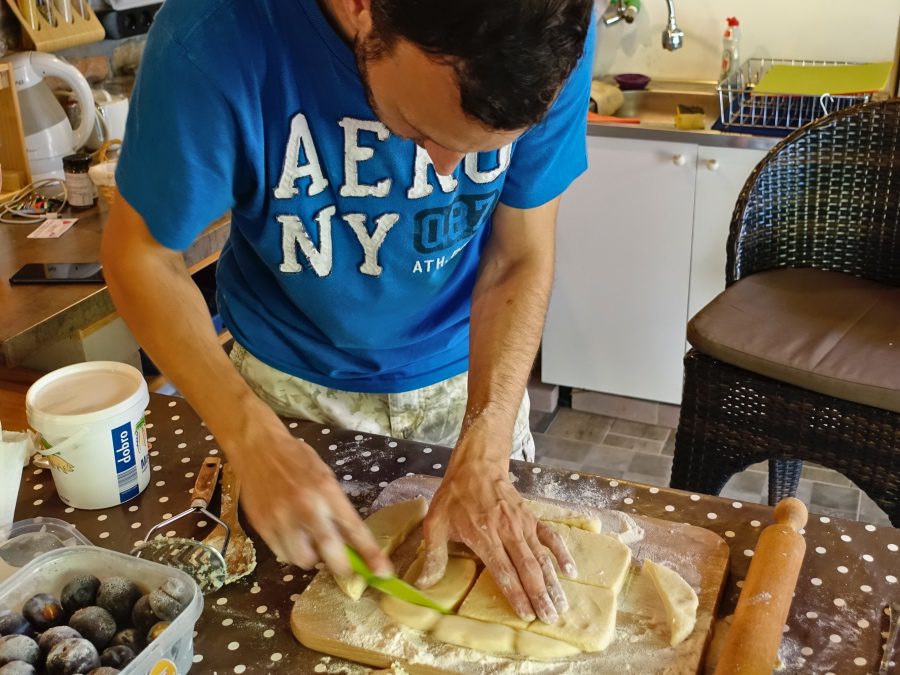 Making plum dumplings in our cooking class in Belgrade

We rolled it out to be about 1.5cm thick and cut the dough into 6 pieces. Vlad took some frozen whole plums from the freezer and we placed one plum into each piece, pinched it together and then rolled it until it was completely sealed.

He told us that we could substitute any type of jam for the filling also. 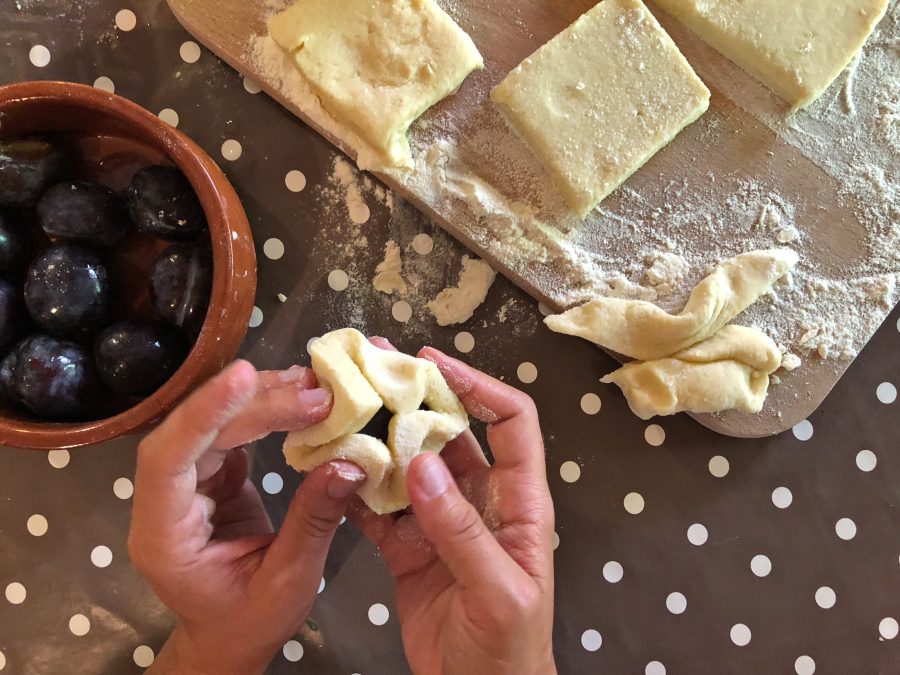 After we’d rolled all six of them, we put them into boiling water. These were to take around 5-7 min to cook.

We prepared a mixture to go with the dumplings by heating up sunflower oil on the stove, removing it from heat and then adding breadcrumbs to lightly fry.

The dumplings were shortly bobbing along at the top of the pot, which meant they were ready. We removed them from heat, quickly strained them of water and dropped them into the fried breadcrumb mix and swirled each ball around until it was entirely covered. We put them into a bowl and covered it with a lid to keep warm.

Now it was time to cook our Serbian feast! We heated two shallow frypans, each with about 2cm of sunflower oil. When it was hot enough, we placed one schnitzel in each pan to shallow fry, turning a quarter-inch once it turned golden brown. The cevapcici was placed onto a grill and started to sizzle away too. 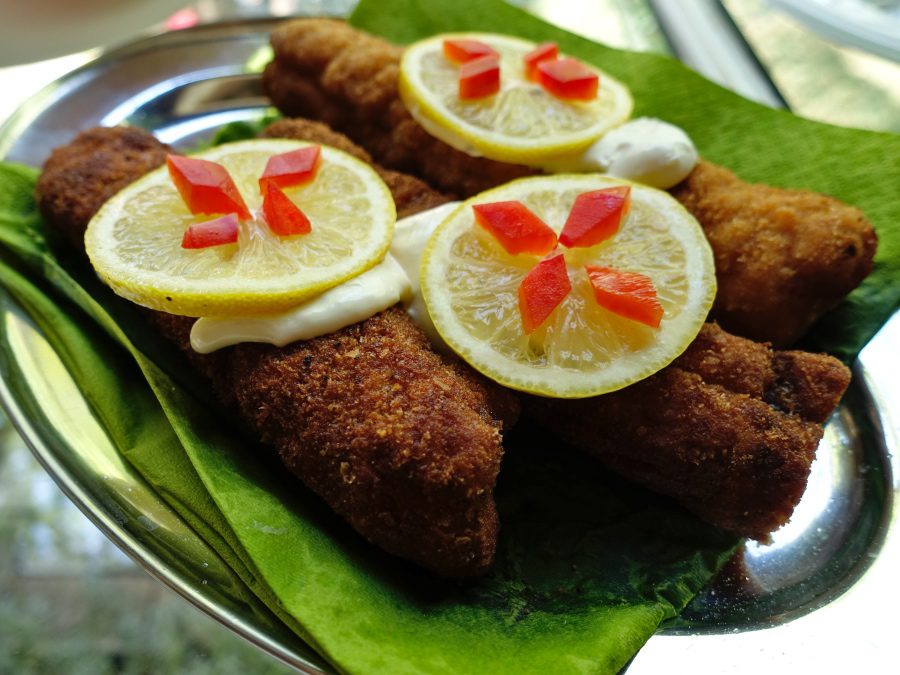 The best part about our cooking class in Belgrade is that we get to have a feast at the end!

As the meat cooked, we took the salad from the fridge, added some sunflower oil and red wine vinegar and mixed the vegetables through. We finely grated some fresh feta cheese over the top, our shopska salad was ready. 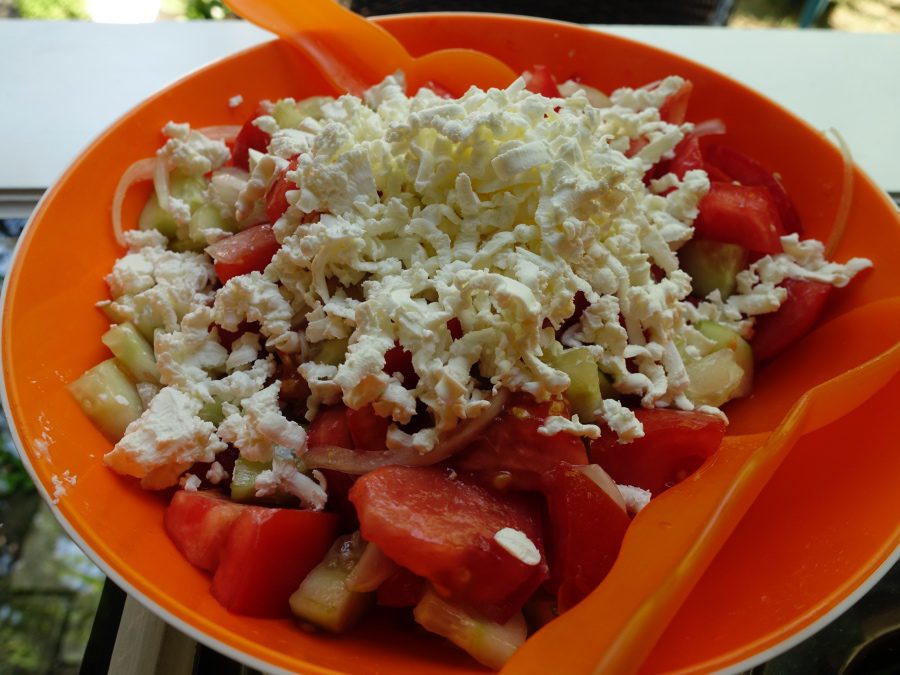