Slovakia vs Slovenia – What is the difference?

If I had a dollar every time someone confused my home country Slovakia with Slovenia, I would be rich. Slovakia vs Slovenia. Slovenia and Slovakia. No, they are not the same country. No, we don’t speak the same language. And no we don’t have a shared history.

I get it. The names sound quite similar, but let’s unpack how Slovakia and Slovenia are different. And hopefully, you will never confuse these two countries again.

Slovakia vs Slovenia – High Tatras in Slovakia and Lake Bled in Slovenia.

So let’s do this: Slovakia vs Slovenia – What’s the difference?

1. Slovakia vs Slovenia – Where are they located?

Both countries are located in Europe and could be defined as part of Central/Eastern Europe.

Slovakia and Slovenia do not border each other. They are separated by two non-Slavic-speaking countries (Austria and Hungary).

Slovenia is near the Adriatic sea, bordering Austria, Hungary, Italy, and Croatia.

Slovakia is landlocked in the heart of Central Europe and surrounded by Czechia, Poland, Ukraine, Hungary, and Austria. 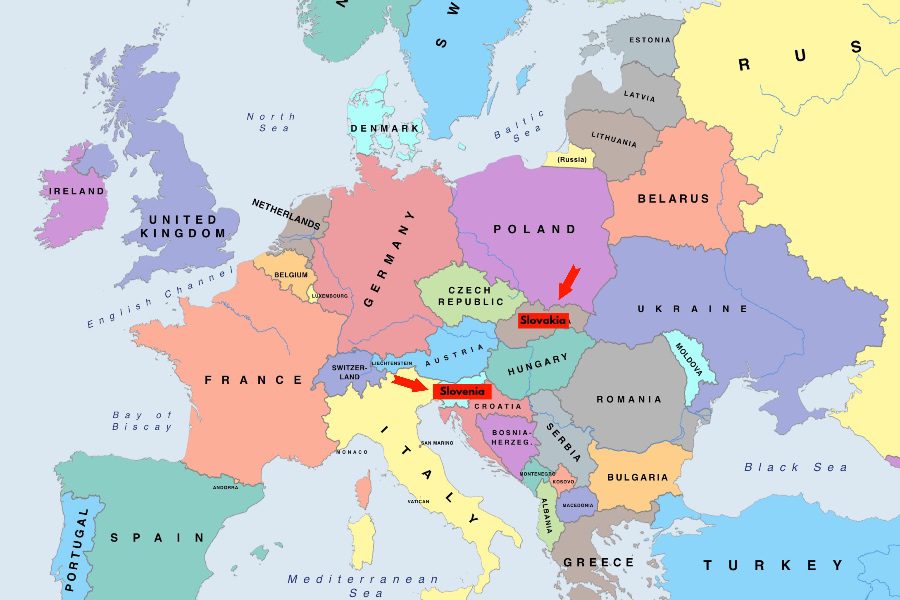 2. Slovakia and Slovenia – Both capital cities are small

The capital of Slovakia is Bratislava. And the capital of Slovenia is Ljubljana. Both cities are relatively small compared to other European cities. Great to spend a weekend in either one of these capitals – enjoy the cobbled streets, baroque architecture, and good food.

They both have a castle and they’re both located on a river. 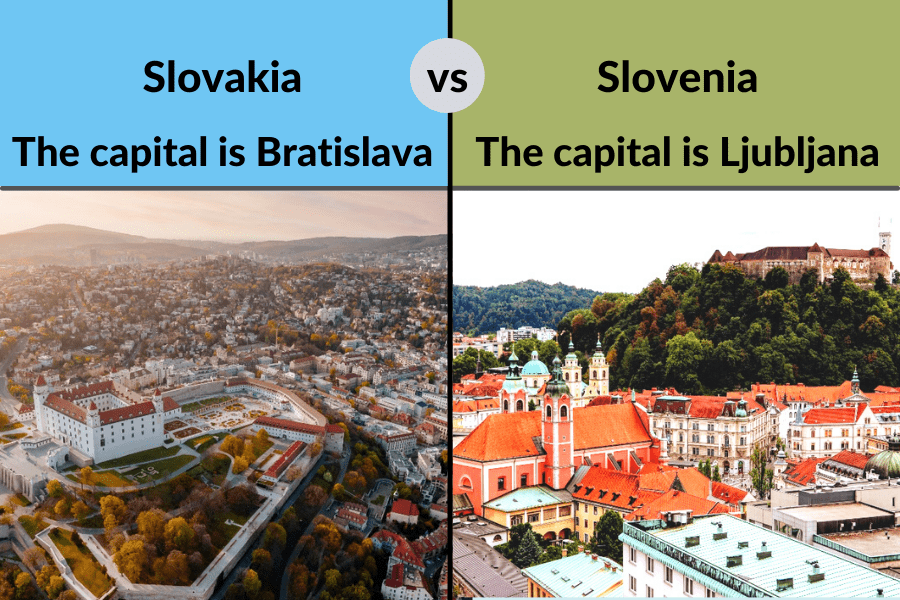 Slovakia vs Slovenia – The two capital cities Bratislava and Ljubljana

3. Getting them confused can be a serious problem

There is no denying that these two countries get confused a lot. Slovakia vs Slovenia – “What’s the difference?” is a question that Alexa or Google answers a lot.

Some of my closest friends from other countries continue to mention things about Slovenia. I have to remind them I am from Slovakia. I have travelled across land borders in parts of the world when my passport details were written down with Slovenia as my country of origin.

I was even denied boarding a flight from Marshall Islands in the Pacific, as they said my Electronic Australian visa was not valid (the details of the passport & nationality are stored online with e-visas these days).

It took a while, but we eventually figured out that they entered my nationality as Slovenia instead of Slovakia.

But here are some other embarrassing mix-ups when it comes to Slovakia vs Slovenia:

It happens at sporting events too. When Slovakia won the ice hockey game against Italy at the IIHF World Championships in 2017, the organiser played the wrong anthem – it was the anthem of Slovenia instead of the national anthem of Slovakia.

At least it wasn’t a Slovakia vs Slovenia game.

And in 1999 George Bush answered a question from a Slovak journalist: “The only thing I know about Slovakia is what I learned firsthand from your foreign minister, who came to Texas. I had a great meeting with him. It’s an exciting country”. You’ve guessed it. Of course, he was referring to a meeting with then the Prime Minister of Slovenia.

They say the former US President Donald Trump would not be challenged by Slovakia vs Slovenia debate. He’s married to Melania who is from Slovenia. And his ex-wife Ivanka was from Czechoslovakia.

Oh, and when it comes to mail, both countries swap mail sent to the wrong country all the time.

4. Slovenia is smaller than Slovakia

5. Both countries used to be part of a different country

Slovakia used to be part of Czechoslovakia. It was a country formed as a union of two ethnicities after WW1: Czechs and Slovaks.

In January 1993, only four years after the Velvet revolution (the fall of communism), Czechoslovakia splits into two different countries Czech Republic (or Czechia) and Slovakia.

Slovenia used to be part of Yugoslavia (translates to Land of South Slavs). Yugoslavia was a federation of six countries: Slovenia, Croatia, Serbia, Bosnia & Herzegovina, Montenegro, and North Macedonia.

Slovenia declared independence from Yugoslavia in 1991. Don’t get the Balkans and Baltics mixed up.

The split of Czechoslovakia was a peaceful event. Unfortunately, the separation of Yugoslavia resulted in a war conflict which ended in 1995. 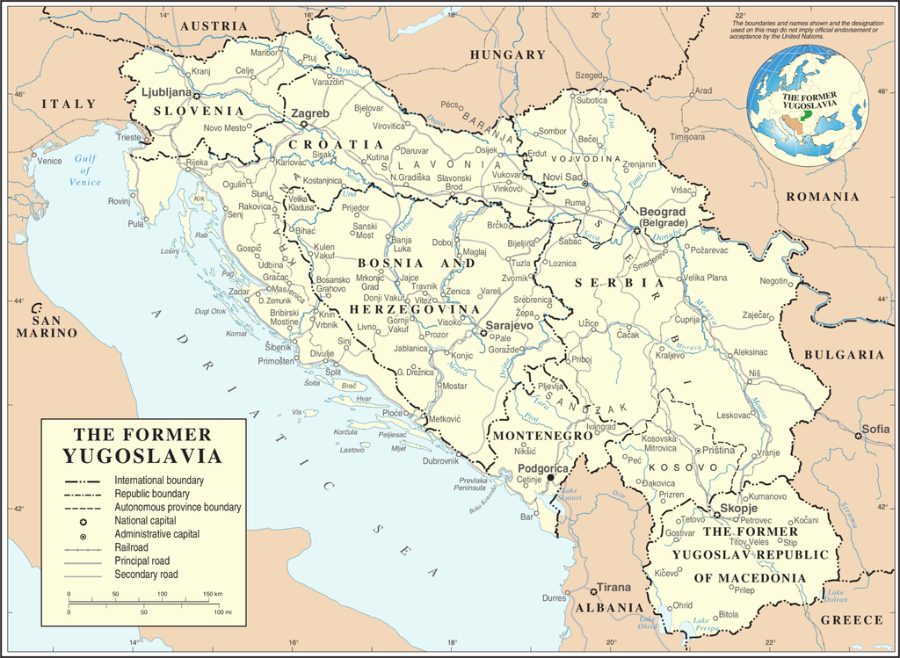 6. What language do they speak? Slovakia vs Slovenia

The official language of Slovakia is Slovak, which is part of the Western Slavic languages.

The official language of Slovenia is Slovene, which is part of the Southern Slavic languages.

To clarify, Slovaks and Slovenians would not understand each other if they spoke their own language. Sure some roots of certain words are similar, but they most likely use German or English to communicate with each other. For Slovaks the closely related language is Czech. And for Slovenians, it would be easier to understand neighbouring Croatian.

A more detailed description of Slovic languages from Britannica can be found in this article. 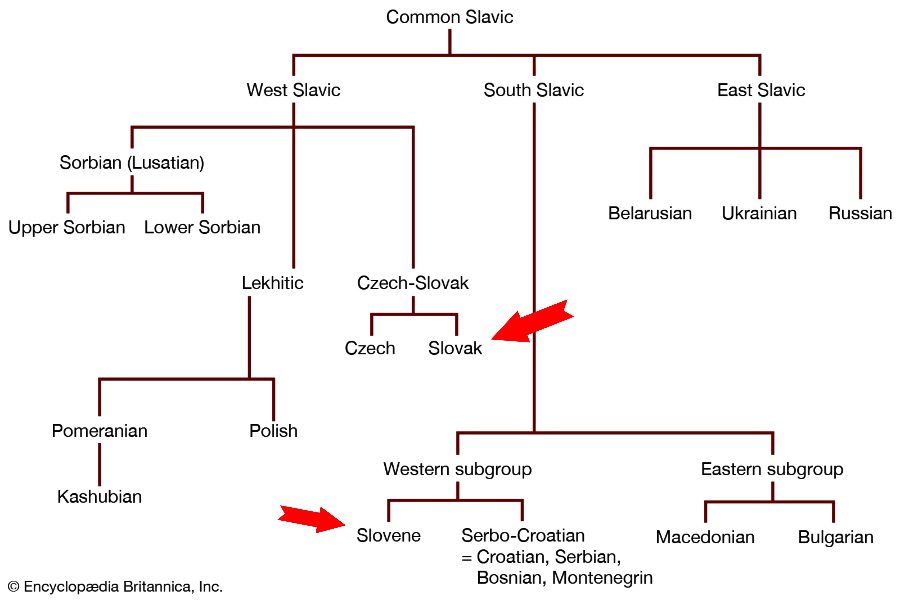 Slovak and Slovene are part of the Slavic language group, but they are not part of the same subgroup. Credit: Britanica.com

7. The Flags – Slovakia vs Slovenia

Ok, I admit the flags look so so similar. Both are coloured by the pan-Slavic colours which are White, Blue, and Red. And both contain a coat of arms.

The national flag of Slovakia consists of three colours white, blue, and red. The Coat of Arms symbol represents three mountains (the Tatra, Fatra, and Matra) and double-cross is a link to the Christian faith of Slovakia.

The national flag of Slovenia features three equal horizontal bands of white, blue, and red. The Coat of arms of Slovenia is located in the upper side of the flag centered in the white and blue bands.

The Coat of Arms depicts the highest peak Triglav covered with snow and three six-pointed stars taken from the armor of the family Celje. The two wavy lines at the bottom of the emblem represent the Slovenian lakes and rivers. 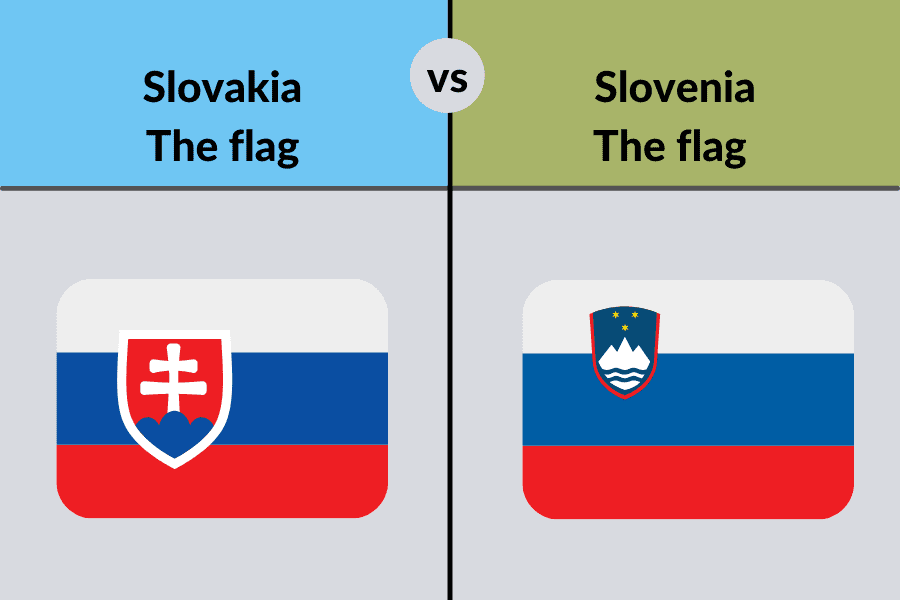 Slovakia vs Slovenia – The flags do use the same colours but the Slovakian flag has bigger coat of arms.

8. Which one should you visit: Slovakia or Slovenia?

I know you’re expecting me to say Slovakia, but I will say: both of them! You should visit Slovakia and Slovenia as they both have something to offer. Especially if you like the unspoiled natural landscapes, mountains, caves, castles, and picturesque towns.

And they are both affordable to visit compared to Western Europe. You can get started with these 10 Best Places to visit in Slovakia.

And that’s it! Hopefully, this is the last time you had to research Slovakia vs Slovenia and what or how they are different. Just a quick tip.

Slovenia is the one with the coast to Adriatic – so further South. And Slovakia is landlocked and the one next to the Czech Republic (the other half of former Czechoslovakia).

You may also enjoy reading 13 Things to do in Bratislava Slovakia (including the fun things to do) and if you happen to stop by, then you’ll need our list of the best restaurants in Bratislava.

Unsure about what to try? Read more about the 18 most popular (and delicious) Slovakian dishes here.

Interested to read more about the 10 most popular Slovenian foods?

Do you know the answer to the question about how many countries are there in the world? Read our post to find out the number and how this is decided.

For more of our best travel advice, tips and hints for travelling the world, check out our Travel Resources Page.

✈️ Flights: WayAway, Skyscanner, and Expedia are the best sites to search for the cheapest flights and great deals from your home country.