Women of Afghanistan – Lunch Inside an Afghan home

We met her at the airport in Kabul. We were waiting to board our flight to Mazar-I-Sharif. A friendly American woman, who after meeting us explained that she lived and worked in Mazar. She was a teacher for an NGO (Non-Government Organisation). To keep her identity safe, let’s call her Jane. She spoke fluent Dari (the local language), had smiling eyes and we instantly felt respect toward her.

An invitation to meet real women of Afghanistan.

We exchanged WhatsApp phone numbers, with anticipation to catch up during our stay in this city. A few days later, Jane invited us to her friend’s house for a home cooked Afghan lunch. Of course, we accepted this very kind invitation.

Cultural experiences such as these are priceless. These are the perfect opportunities to learn more about the people and share some real moments.

It’s also the reason why we are on this journey to visit every country. We endeavour to show how much kindness exists in the world and to share our real experiences with the local people along the way.

We met Jane at an old fabric shop on the corner of a residential street. We carried on walking to her friend’s house. She had made some sweets as a gift for the family for hosting us today. It’s common to bring a gift when invited to dine at somebody’s home in Afghanistan. We planned to buy a box of chocolates on the way to lunch, but Jane insisted not to since she made plenty of sweets from us all.

The sun was hot today and the wind was blowing harder than other days.  As we walked, we gripped at our hijabs (scarves) covering our heads, desperately trying to keep them on.

Stepping over uneven gravel, dusty streets and catching glimpses of curious gazes from locals scurrying by, I felt worlds away from anywhere in that moment.

I could just make out the wide eyes behind the netting of women hurrying by wearing a full burqa, the only flesh visible are the hands and a small area of the feet. Jane addressed her with a few words in Dari and an upbeat young voice has replied.

They exchanged a few words and we learned that she has invited us for tea, such a common occurrence in this country.

Suddenly we stopped and turned into a small alley. We had arrived. A large, creaking iron gate opened. A smiling old man with his hand over his heart welcomed us to come inside.

Women of Afghanistan are curious to learn about other cultures.

We entered the courtyard of the home and we were immediately welcomed by three smiling Afghani women, all chatting with excitement at once. Jane exchanged hugs and three kisses on the cheek with all of the women. We followed her lead and were welcomed by each woman in the same way.

The mother asked her two daughters to show us inside whilst she checked on lunch.

I glanced to my right, there was a large shallow pot cooking away over a small fire lit underneath. I watched her lift the lid to uncover over two hundred perfectly formed dumplings bubbling away. It looked amazing.

The home-made dumplings cooking away in the courtyard.

We removed our shoes before entering the home and we were ushered into a sitting room. This was a simple, yet beautiful room with large cushions laid out to sit upon.

Jane whispered for us to sit on the highest cushions at the end of the room, the ones farthest from the door. As we were guests today, we were to sit at the highest point as a mark of respect and honour for our presence in their home today.

We sat cross-legged, both daughters were darting back and forth placing cold drinks in front of us and then produced two huge trays full of currants, almonds sweets, dried chickpeas and sunflower seeds to snack on.

Jane formally introduced us to the women and the two daughters started with many questions for us.

Jane translated for us as the questions started. The common questions, as we expected were asked. “What country are we from?” “Were we married?”  After learning that we weren’t married and perhaps a little puzzled why, the eldest sister, Muska asked my age.

After learning that I am a woman in my mid-thirties, unmarried and travelling without a man, this confused her. This is unheard of in Afghanistan culture.

She asked if we had any siblings. I answered that I had brothers and she commented that my family were very lucky for this. In Afghan culture, a boy is of better value to a family as he can work and provide income for the family and it’s seen as a blessing.

Women are expected to marry very young and bear many children and keep a good home for the family.

Sharbat, the mother returned and requested the girls help to prepare lunch.

They returned to the sitting room to remove the trays of snacks and then laid out a large pretty place-mat, which acts like a tablecloth (we were eating on the floor, as this is how you eat in Afghan culture).

The tablecloth was brand new and after Jane commented on this, the others seemed to be very proud to confirm this.

I looked through the window, into the courtyard, I could see them preparing our meal. Glass trays were spread first with a creamy sauce, perhaps sour cream. The trays were then loaded with dumplings which were filled with fresh herbs such as mint and coriander. A Napoli sauce cooked with small cubes of potato was drizzled over the top to finish the plate.

The women bought the food inside and we were each served our own tray, accompanied by some round naan (bread) and basmati rice on the side. 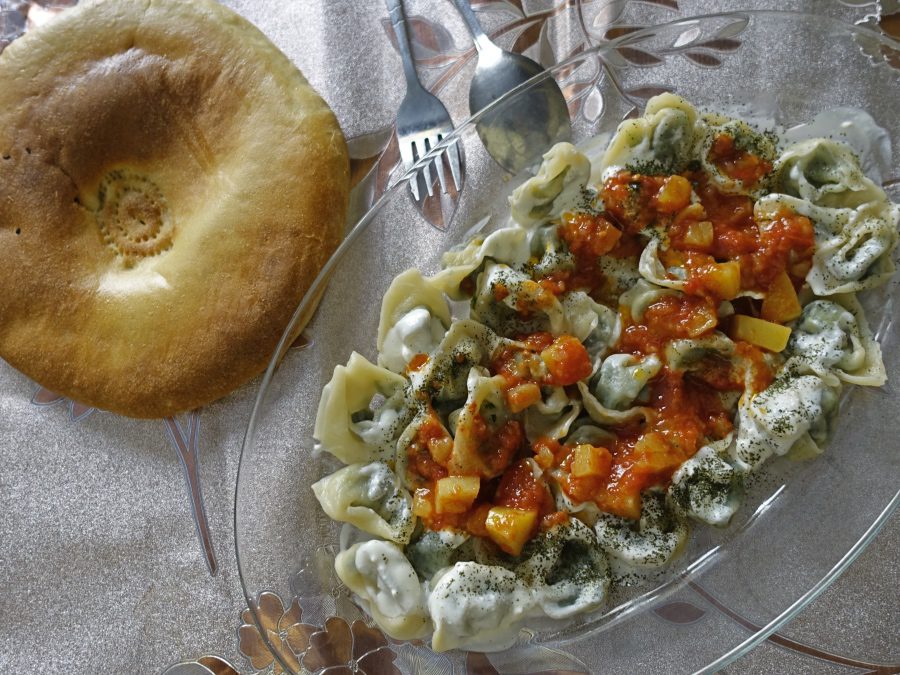 Once the ladies had all sat down with us, we began eating. The meal was delicious. We continued to chat throughout the meal.

Jane could barely get a mouthful of dumplings in as she was trying hard to continue to translate for us as the women still had many questions.

More questions about our culture

“Where was our favourite country?” ‘”What country do we think has the best looking people?” “Is my hair colour real or do I colour it?”  “Do we like Afghanistan?” “Why do we wear the hijab?”  Jane answered this last question for us and explained to me that she said we wear it as a sign of respect for the Afghan people and culture.

To be clear, it’s not compulsory in Afghanistan to have to wear hijab or scarf, however, if we didn’t do so, we’d be the only ones. This would then encourage much more attention than we’d prefer to have and would essentially put our lives in danger. The only option for foreigners to be quite honest is to wear it.

A tray of plums, apples and cucumbers was then served, the Afghan people sure know how to host guests. After a while, Sharbat left to go and clean the dishes in the courtyard, along with her youngest daughter.  Jane’s friend, Muska, the one who invited us for lunch remained.

Her youngest daughter, perhaps five years old entered the room and sat playing on a cushion. The fruit was cleared and then hot saffron tea was served alongside biscuits and more sweets.

Muska also had a baby boy who we’d been taking turns to nurse the entire time. The baby was quiet, a smiling and cute little boy. In between conversation, I looked over at Muska and realised that she had just started breastfeeding her baby.

This came to me as a surprise. During lunch, the women were all fully covered and wearing hijab. The thing I noticed is the skin on her arms, chest and shoulders was in pristine condition. There wasn’t a mark or blemish in sight on her very pale skin. Her face and hands were tanned and naturally looked older because, for women of Afghanistan, this is the only flesh that ever sees the sun and the harsh conditions of this country.

I later learned she was only 26 years old.

Life during the Taliban Regime

We spoke about her life for a while, it was nice to take the limelight off us for a minute. She opened up about how life was for her during the time of the Taliban Regime.

Television, radio and music were banned and it was compulsory for women to wear a full burqa when outside. Keep in mind however that women had to stay home and were not allowed to be outdoors without a male.

Women had no right to an education and the literacy rate dropped significantly. She explained that at present day, the women who were young girls (or my age) during the Taliban regime cannot read or write.

At that moment while listening to this mature, smiling young Afghani woman who is ten years younger than me, I felt very blessed to have been born in a free country.

Muska was mature beyond her years, however, I don’t believe that she really had any say in this, she had to be.

She asked how it is possible that we can travel to all these different countries and how we can afford it. I tried my best to explain that in my country, women marry much later in life than in Afghanistan (where marriage for women is legal at age 16 and this will commonly be an arranged marriage).

We explained that women also work full-time jobs and have the same equal responsibilities of men to earn money. We told her that we had worked very hard and saved our money to afford to visit her country, amongst many others.

Muska explained that she had studied to be a teacher in her younger years and that she was qualified. She hadn’t entered the workforce yet as soon after marriage, she was expected to start a family.

This remains the same, whether she is in love with him, or whether he was chosen for her from both families through an arranged marriage.

Sharbat returned to the room and whispered into Muska’s ear. Suddenly we were being presented with a gift from the family. They were giving us jewellery, a ring and a necklace. I knew that it would be impolite to decline this gift and Jane confirmed to us that we should accept it.

We accepted with smiles and thanked these beautiful women for inviting us into their home and helping us to learn about their culture.

Shortly after, and with a very warm heart, we said our goodbyes to these real women of Afghanistan. I feel very lucky to have had this experience and I’m certain it’s one that I will not likely have again soon.

Interested to learn more about our visit to this country? Read our post “What is the Future of Afghanistan?”