Visiting Turkmenistan – What Is it Really Like to Visit this Unusual Country?

Visiting Turkmenistan, it’s not for everyone. Some of you might be quietly wondering to yourselves, where in the world is that? Where is Turkmenistan? 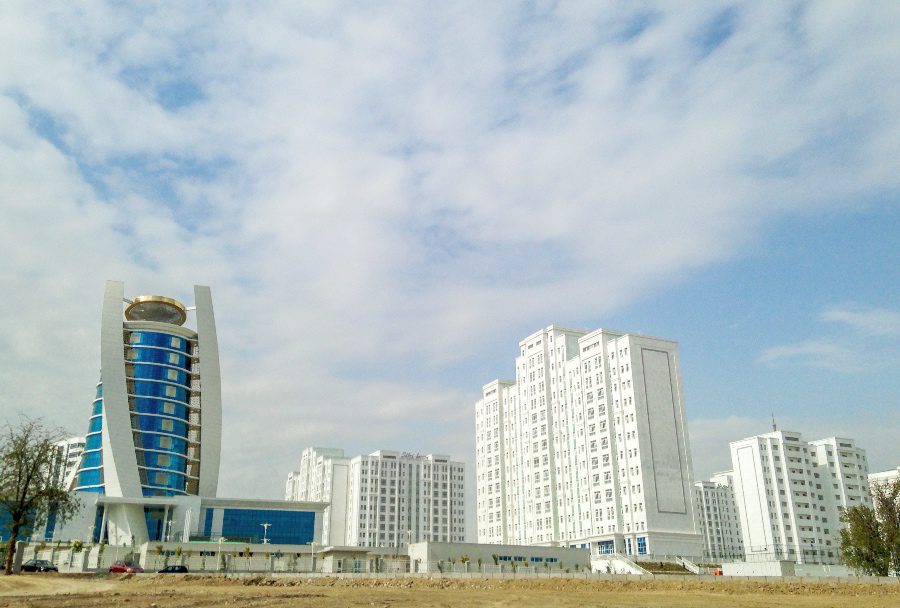 Turkmenistan is located in the southwest of the Central Asia region. It is bordered by Kazakhstan, Uzbekistan, Afghanistan, Iran, and the Caspian Sea. 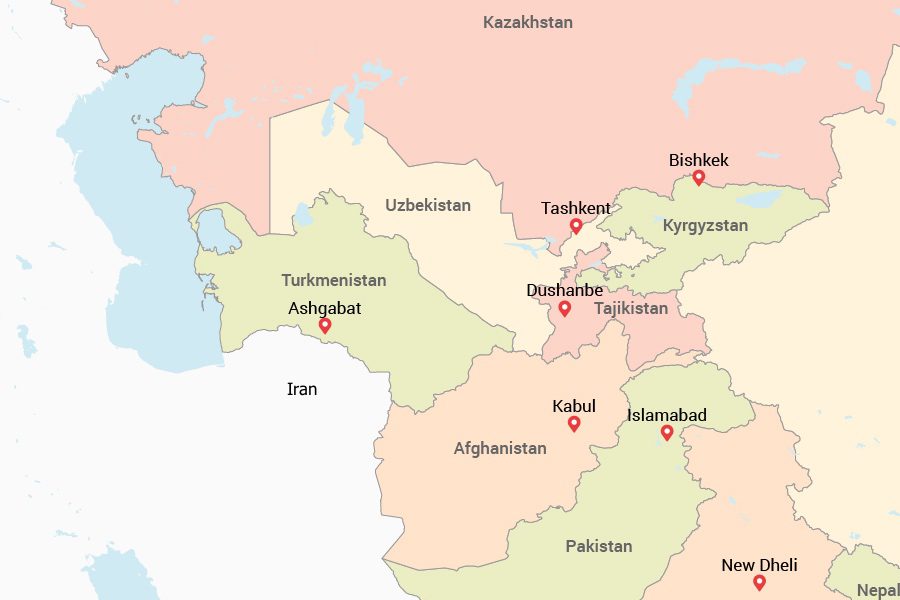 Where is Turkmenistan – On the edge of Central Asia (Freevectormaps.com)

Visiting Turkmenistan wasn’t easy. It’s not the easiest place to obtain a visa but we got there. It was the last ‘Stan’ on our list of countries we travelled through in Central Asia.

To be honest, I didn’t know anything about this country until we decided to travel across Central Asia overland. Something we wanted to see in the country was Turkmenistan’s gates of hell.

Turkmenistan is the 7th least visited country in the world.

After crossing a very quiet and lonely border crossing from Uzbekistan into Turkmenistan, we hired a car with a driver and made a stop in the Karakum desert to see the Darvaza Gas Crater, otherwise known as Turkmenistan gates of hell.

There’s also an option to do a 3 Day Gas Crater tour, which begins in the capital city of Ashgabat. 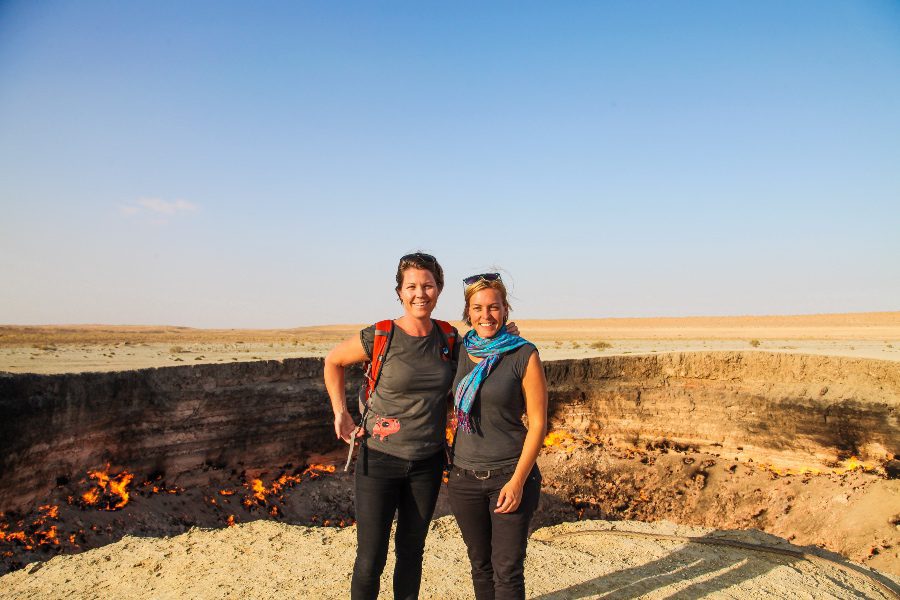 What an unusual sight this was.

The story goes that a Soviet geologist was drilling in 1971, and he taps into a cavern filled with natural gas. The ground beneath the drilling rig collapsed, leaving a huge hole with a diameter of 70 metres, and 20 metres deep.

A decision was made to burn it off to avoid poisonous gas discharge. It was expected that the fire would use all the fuel in a matter of days, but the gas is still burning today. Locals have named the crater, ”The Door to Hell’.

And for travellers that are visiting Turkmenistan, this place is a must. 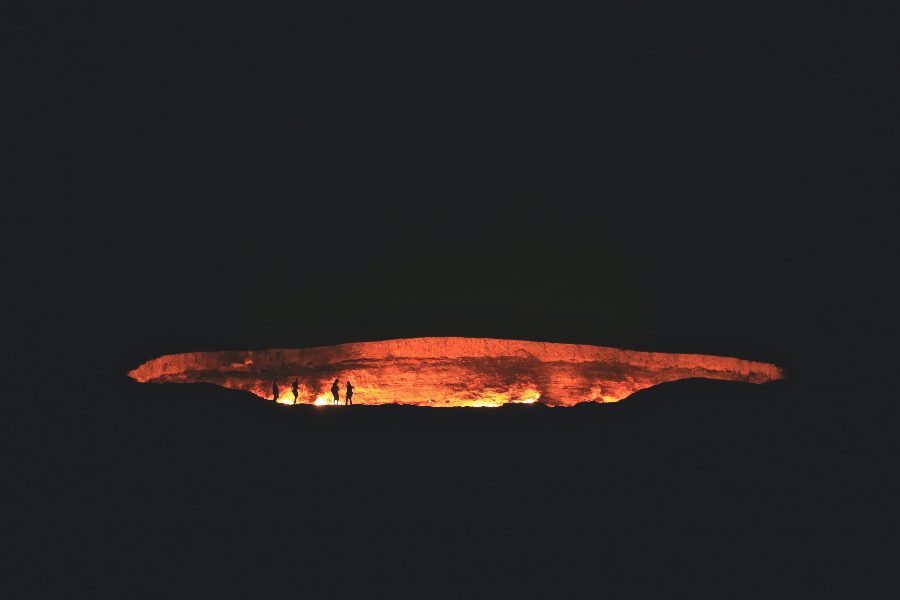 The smell of sulfur is really strong standing next to the crater, and the amount of heat it expels is huge. What a bizarre place this is, Turkmenistan’s gates of hell are not like anything we’ve seen before.

After walking around this unique site and taking photos, we continued on our way.

Arriving in Ashgabat – visiting the capital city of Turkmenistan

We arrived in Ashgabat, the capital city of Turkmenistan. We wanted to learn about this interesting country from a local perspective, and we were lucky to find a local woman on Couchsurfing, willing to host us in her home. She turned out to be one of the funniest women we’ve ever met, and she had so many fascinating stories to entertain us during our stay.

In fact, we know that visiting Turkmenistan would be very different if it wasn’t for her help and her willingness to tell us more about her country.

We have learned that Turkmenistan possesses the world’s 5th largest reserves of natural gas resources and that since 1993, citizens have received FREE electricity, water, and natural gas, provided by the government. Major bonus, right?

We had many questions about this country after all visiting Turkmenistan was not something we thought we will do in the future. And our host was happy to answer them, quite candidly.

Over many conversations including coffee and Moldovan wine in her apartment, she explained the lives of the average Turkmen people. 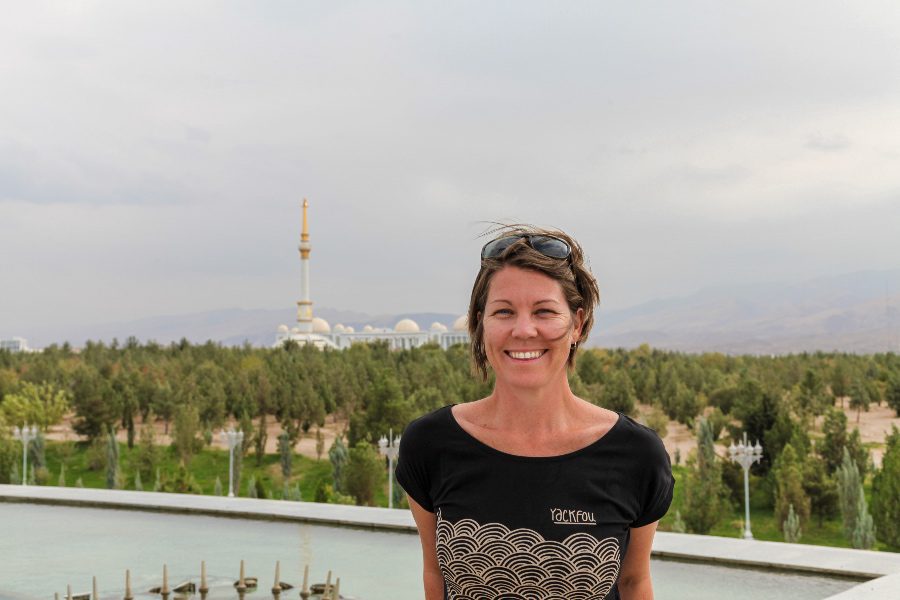 She explained that most people simply leave the gas stove on low heat, rather than turning it off completely and later lighting it again.  The gas is free, this way they don’t have to purchase matches to light the stove! I wondered if she was kidding us, but she was totally serious.

She also told us that we didn’t have to turn lights off in her apartment when leaving a room, telling us that the light bulbs take about ten minutes to heat up to produce bright light, and since they don’t pay for electricity, it was easier to just leave the lights on.

Free fuel for citizens (up to 120L each month)

Also, did you know that vehicle owners in Turkmenistan are also entitled to 120 litres of petrol free per month?  After this is used, the price is very low, at around US 0.30 cents per litre. Our visit to Turkmenistan turned out to be a real eye-opener.

The wealth of this country can certainly be seen in the city of Ashgabat. Our first day spent sightseeing was one of the most surreal days I have spent in any city, ever. 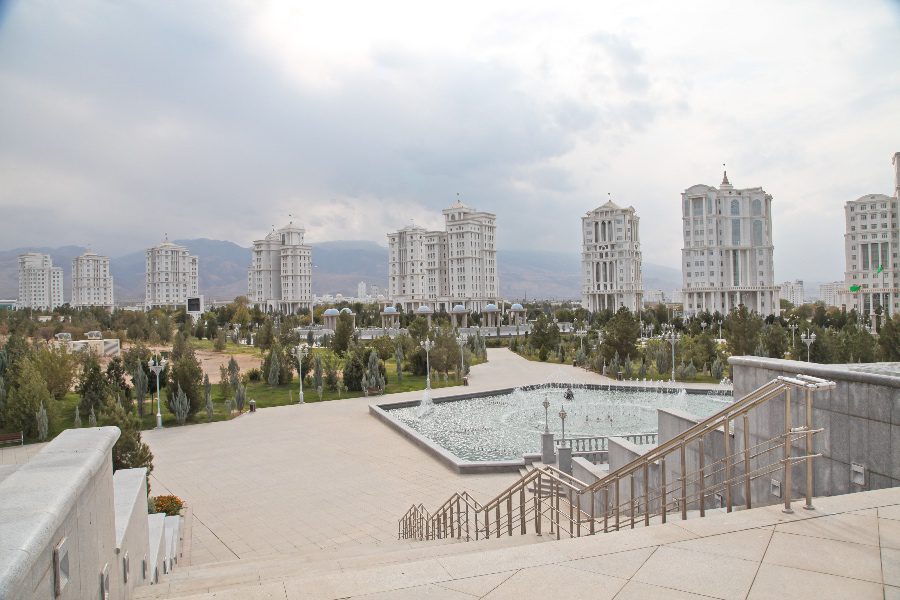 These huge marble buildings were everywhere in Ashgabat

On the surface, Ashgabat looks to be built entirely of marble. Apparently, the late president wanted this city to be known as the ”white city”. There are huge golden monuments everywhere, generally placed in or around fountains. Hundreds of fountains, everywhere! The sidewalks are very wide and the gardens are perfectly manicured.

We were advised upon our arrival in the country, that most of Ashgabat’s sights are official government buildings and it is forbidden to take photos. We soon found that this is very much enforced by policemen who are stationed on most corners around the city.

We managed to take a few photos before the policemen blew whistles at us and asked us to move on. They do seem to have many rules and regulations in Turkmenistan. We knew about this as other travellers have warned us after visiting Turkmenistan. 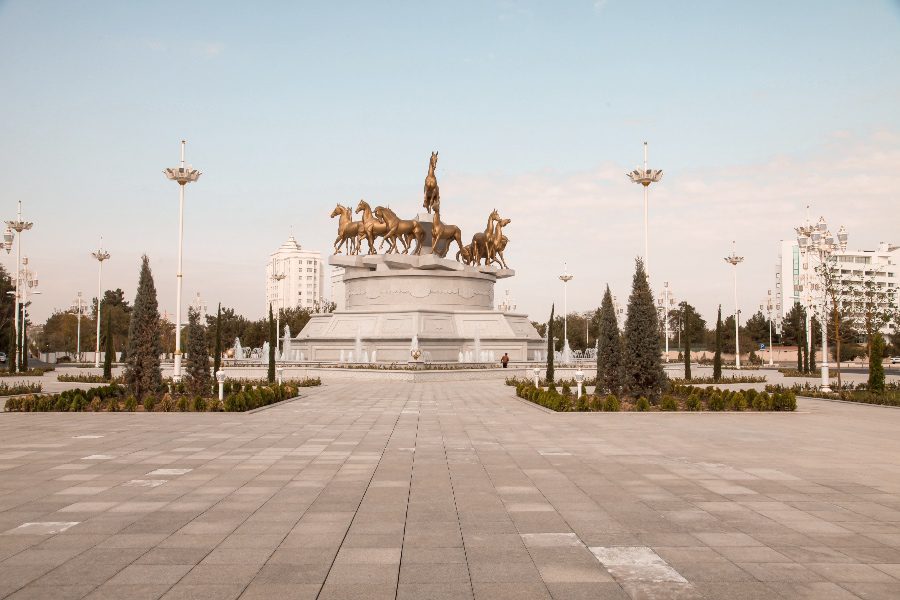 Visiting Turkmenistan and its capital Ashgabat? – Get ready to see a lot of marble and Gold.

Walking around Ashgabat, we were all wondering the same thing. Where were all the people? It was empty, and it felt like we were wandering through an evacuated city. Policemen and street sweepers were the only people on the streets.

The public bus stops here were really classy. Imagine an enclosed glass room with comfortable seats, tv, and air-conditioning.  I wondered why.

It seems that anyone who does live in the city drives their new cars to get around. 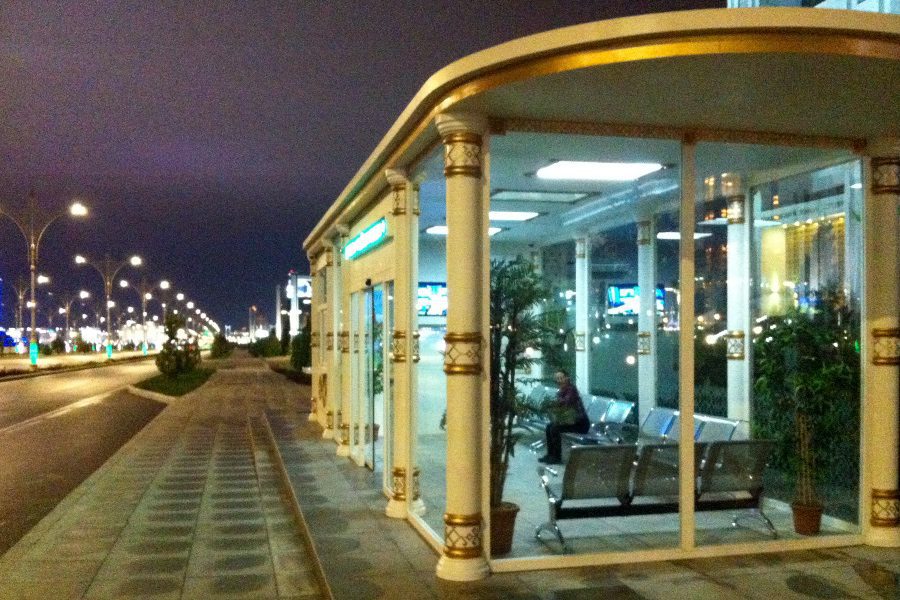 The bus stop in Ashgabat Turkmenistan at night. It was air-conditioned.

I asked our host what the hundreds of huge marble buildings were used for, because I didn’t see any people going into them, and they appeared to be abandoned.

She told us that all these buildings were banks, universities, companies, and government buildings, and they were indeed busy all day. The reason we don’t see any movement in them is that the entrance to these buildings is located around the rear of the building.

People drive into the carparks in the back of the building, they work, and at the end of the day, they get back into their cars and drive home.

Just for the record, we did take a short bus ride out of the city to the local markets on our second day and found people.  Hallelujah! 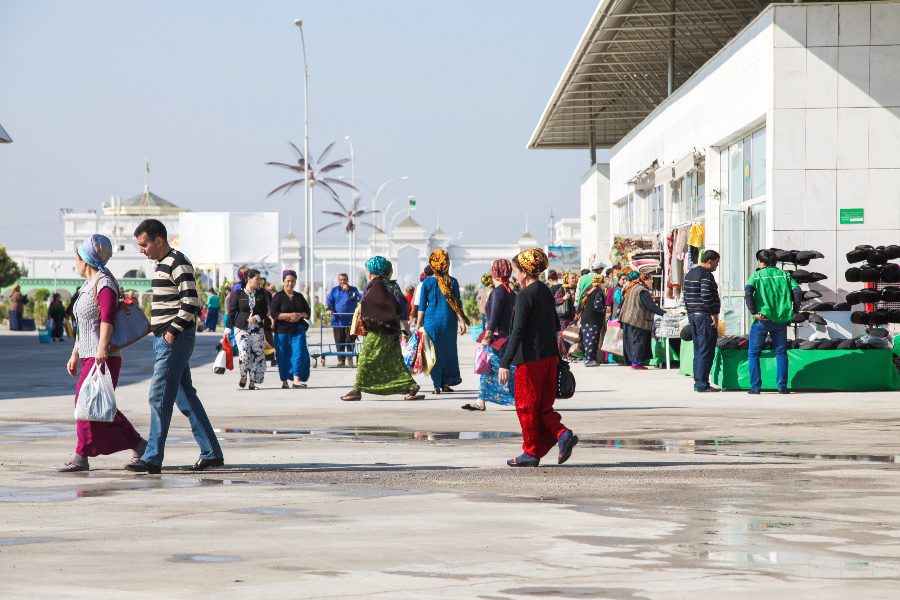 I’d describe Turkmenistan as the strangest country I’ve ever explored, but I appreciated how odd and different it was. Visiting Turkmenistan has really opened my eyes to his part of the world.

I think we could have had a different experience if it had not had been for our very generous host, who helped us to understand her country.

Don’t leave home without getting covered with the best travel insurance policy available. We use and recommend SafetyWing Travel Insurance OR World Nomads Travel Insurance.

And that’s it. Visiting Turkmenistan was really something, especially seeing the Turkmenistan gates of hell. Have you ever felt like you were standing in an empty city? We’d love to hear about the strangest place you have ever been.