How to Avoid Common Tourist Scams in China 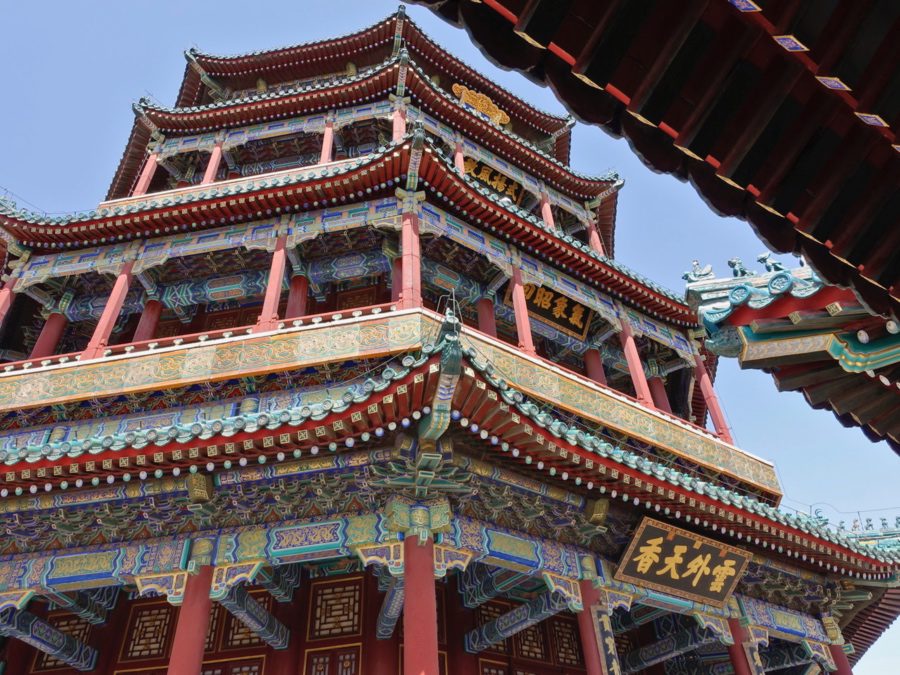 That terrible feeling of getting scammed or ripped off when visiting a new country is infuriating. It happens in all the major tourist hubs all over the world, and travelling in China is no different. If you are aware of the most common tourist scams in China before you arrive, you’ll have a much better experience in this country.

Although the Chinese are hardworking, honest people, it’s expected that in the country with the world’s largest population, there are sure to be a few con artists.

Scammers will target foreigners who may not be aware of potential scams to trick you out of your money or possessions. They often target gullible-looking tourists or intoxicated individuals, so read on to ensure you are not the target for any scams in China.

The scammers (who will speak good English) will generally target tourists for a few reasons;

The con artist recognizes that western tourists are more inclined to be polite to a stranger rather than appearing rude and walking away, so they play up to this.

Some of the following scams can be quite sophisticated and continue to catch even the most experienced travellers, but knowledge is power!

Educate yourself before you arrive

When planning your travels to any new destination, it’s important to be aware of your surroundings. Be educated before you arrive and use your common sense.

Once you know the scams to be aware of, don’t let this dissuade you to travel to China. There are many incredible sights to see and lots of delicious food to be devoured here.

See our list below of how to avoid common tourist scams in China.

1. That hotel is closed or has burned down scam:

This one happens in many Asian countries, not just in China. The con is that your taxi driver will tell you that your hotel has recently closed, or even burned down. He then recommends a new hotel, for which he will likely get a commission for each new guest he brings to that hotel.

How to avoid it

Take accredited taxis only. These can generally be found at official stands at airports. You’ll find that all registered taxis in Beijing have a “B” on their number plate. These taxi drivers won’t appear desperate for your business.

If he doesn’t, then simply get out of the taxi, along with your luggage, and try another taxi.

I recommend that you make hotel bookings using Booking.com, as the confirmation is emailed to you with a translation of the address in the local language. This can especially be helpful for countries such as China, where not much English is spoken.

You can simply show the address written in Chinese to your driver. It will make your life much easier.

TIP: We prefer to travel in taxis with our backpacks/luggage in the backseat with us, rather than in the trunk of the taxi. This way you can make a swift exit from awkward situations with your stuff if things don’t go to plan.

The fake taxis have many ways they will try to scam anyone, including locals too.

TIP: Never show your money or wallet to the driver. They rely on the fact that you’ve just arrived in a new country and may not be so familiar with the currency just yet and you’re probably tired from a long flight.

Always think ahead and have some small currency or notes in your pocket to pay the fare. It’s always a good idea to have an idea of how much an approximate fare is in Chinese Yuan from the airport to your hotel before you arrive.

We use Xe.com to quickly check up-to-date exchange rates on our phones. Download the app on your phone and add that currency conversion to your app before your arrival in a new country.

Be wary of insistent drivers trying to direct you to their taxi. Take accredited taxis at the designated taxi spots, and have an idea of your route beforehand. (Always have the address written in Chinese, as it’s very likely that your driver will not speak or understand English).

Our recommendation is to load the route beforehand into your google maps app on your smartphone when you have access to wifi.

Once you arrive, you can follow the ‘blue dot’ from the airport (for example) to your hotel and see that you are heading in the right direction.  Some airports have employees designated to help you find a taxi, the price will be decided beforehand and you will receive a receipt before getting into the taxi.

TIP: Another fantastic phone app we use to navigate our way around the world is Maps. Me. Download it to your phone and also download the map of China before your arrival. This map can then be used offline. It’s a very useful tool.

– The best travel websites to save you money 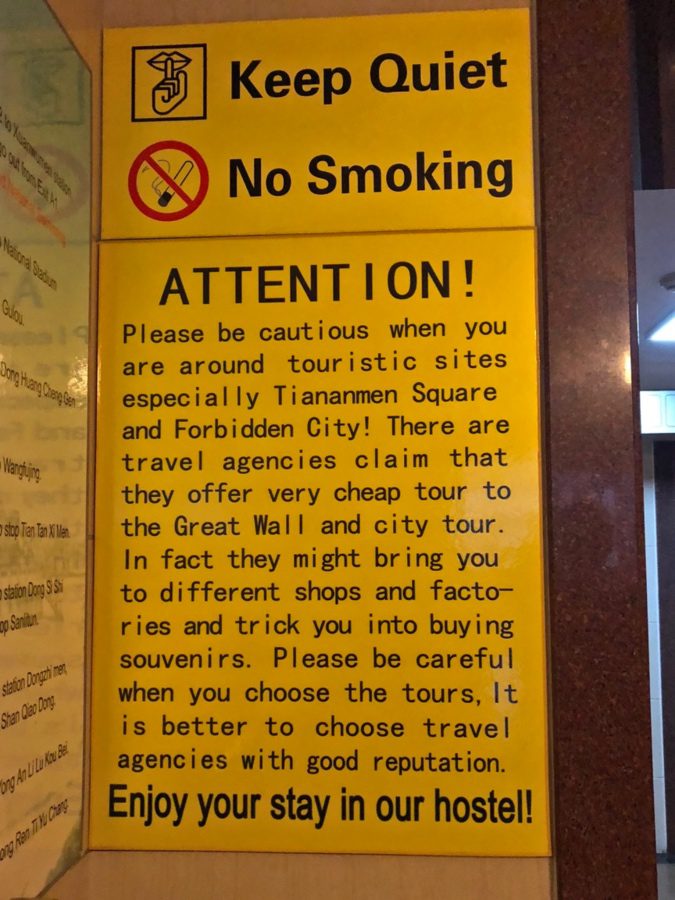 Signs posted around our hotel in Beijing

A highly popular scam in China, this one is particularly rampant in the touristy parts of Beijing (like Houhai Lake nightlife district and Wangfujing shopping district). Solo male tourists are the common target.

A Chinese person, more often than not a sweet innocent-looking girl or a young student couple approach you. A common question would be “where are you from”?

It doesn’t matter what country you say, she will mention that she has a friend/family member there or mention some well-known fact about your country. After building a rapport with you, chatting and laughing, they will suggest going somewhere to practice English, such as a teahouse or karaoke, or similar.

Thrilled by the chance to have an authentic Chinese encounter with a local, you eagerly accept. You follow them somewhere to sample some tea or whatever. Later, you’re presented with a ridiculously pricey bill (often several hundred dollars).

By this time, your new friend will have already disappeared after earlier excusing themselves to use the bathroom, not forgetting to collect their commission on the way out.

Now you’re outraged that you’ve been handed this bill. If you try to leave, you’ll find yourself with several large men who will demand you pay this bill before you leave. There aren’t too many options you have at this stage.

I’d suggest paying the bill and note this one down as a lesson learned.

How to Avoid Getting into this situation:

Be somewhat wary if approached by a stranger, especially someone who speaks good English, as most Chinese tend to keep their distance from foreigners.

Next, if they want to take you somewhere to practice English, this should ring alarm bells for you. Kindly decline and be on your way. 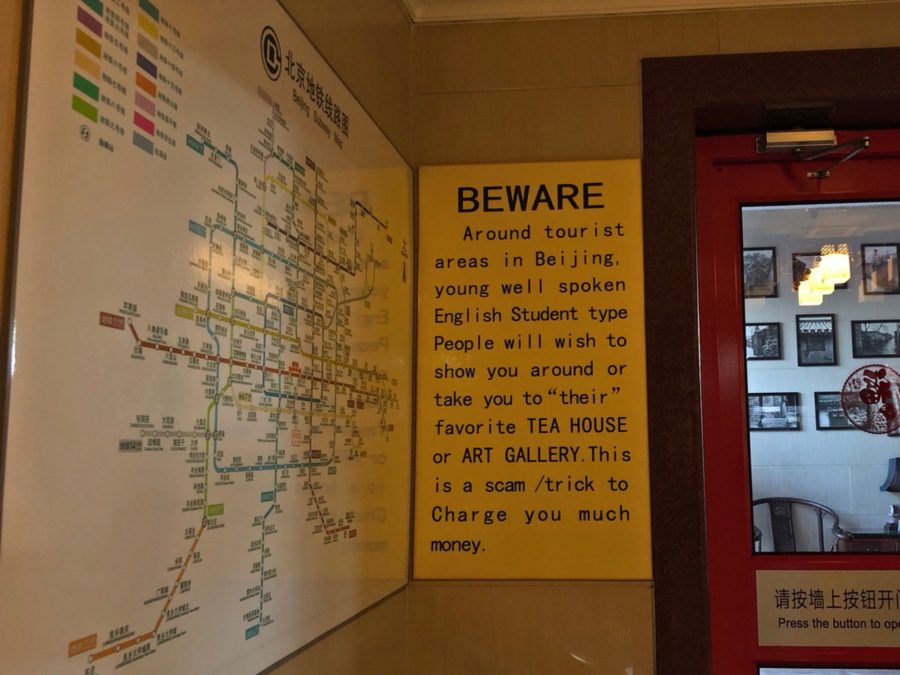 This scam is common all over the world. These fake monks approach you and take out a donation book. The book lists fake donations made from people around the world, listed in many different languages.

A smart scam because this book adds a feeling of guilt for you.

Real monks rarely ever ask for donations in overcrowded tourist areas, so smile and firmly refuse and walk away.

These guys like to take foreign tourists ‘for a ride to see main highlights ‘. Some drivers will agree on one price with you (e.g. Y40), then later will claim that you misunderstood and will demand a much higher fare (e.g. Y400).

They may even try to claim that it’s Y40 per person, not the final price. This smiling driver will very quickly get outraged and loud to intimidate you into paying. Don’t expect anyone to come to help you out as locals will choose not to get involved.

How to avoid this:

Be on guard and avoid drivers who are insistently pursuing you to take a ride. If you do accept, agree to a price in writing. I type the numbers on my phone and ask the driver to agree first, just so there are no surprises.

If you do find yourself in the position, simply leave the originally agreed upon fare on the seat and calmly walk away.

These super cheap, low-quality tours are found around popular markets and busy streets.

The cheap ‘highlights of Beijing’ tour that you’ve just booked will not be enjoyable. You will be carted around to shops to buy overpriced items and souvenirs, along with other tourists. An inexperienced guide leading the way receives a commission from each store he takes you to on the tour.

Be smart, plan ahead, and use your common sense. Plan your days by searching online for information on the best tours and attractions and only used licensed operators.

Ask the assistance of recommendation from your accommodation provider too. This scam is usually easy to spot. So if it sounds too good to be true, it probably is.

You may or may not experience some of these scams during your visit to China.  Just remember that all of these scams can be avoided if you educate yourself.  If you’ve read this entire post, you should be all set to go.  Remember to use your common sense and be aware of what’s going on around you.  If you do this, you’ll have a wonderful experience. 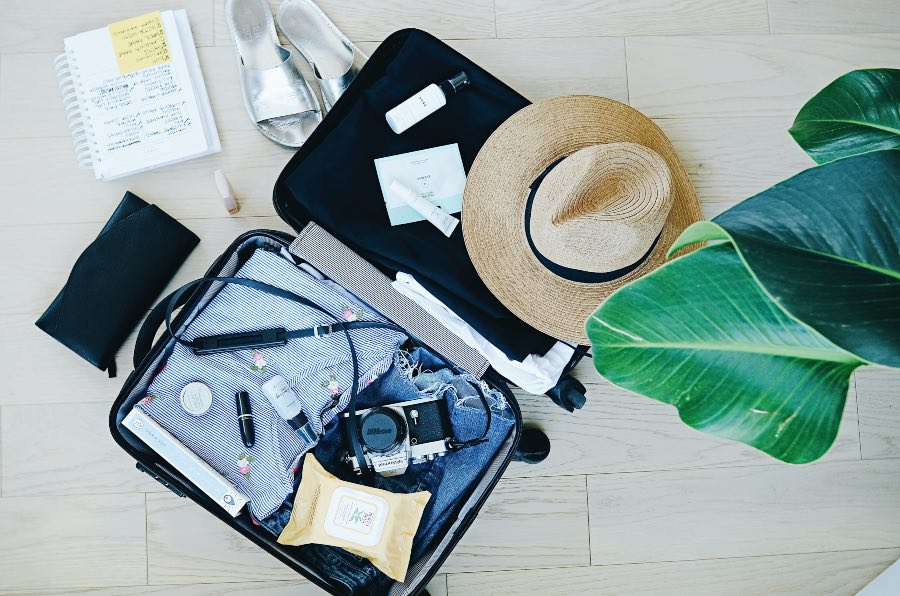 Sign Up to our Newsletter for Great Travel Tips! Save Money with Us!

BEST TRAVEL WEBSITES TO SAVE MONEY! 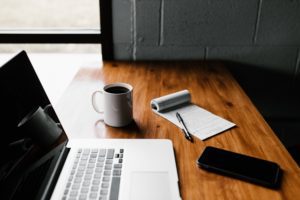