How Many Countries in North America? Why 3 is The Wrong Answer! 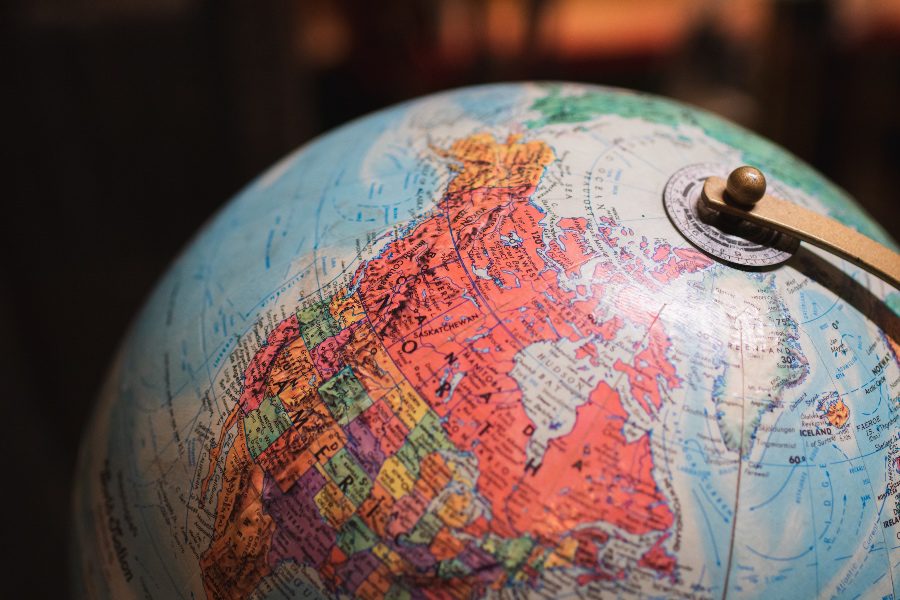 I was lucky to visit all the countries of North America, but just like you, I was surprised what is and isn’t a country in the Caribbean region that belongs to the North America continent.

Let me explain how are countries in North America are defined. We start with the three big ones, followed by Central America and then the Caribbean islands/countries.

Some of them are actually not countries of North America, but overseas territories.

Countries in North America – The three big ones

The North American Continent is dominated by three large countries: Canada, the United States of America and Mexico.

I have spent a lot of time here, even lived in the USA. But the best fun was probably relocating a motorhome in the USA for just $1 a day along Route 66! What a trip!

Mexico is one of the best countries in the world, so there is no surprise I got stuck there for a while. I was on an adventure to find out which 5 cities have the best food in Mexico.

I even learned how to speak Spanish and ate a lot of amazing food in Oaxaca, (also number one best food city on my list).

I mean if you need a reason to travel to Mexico, here are 10 of them. 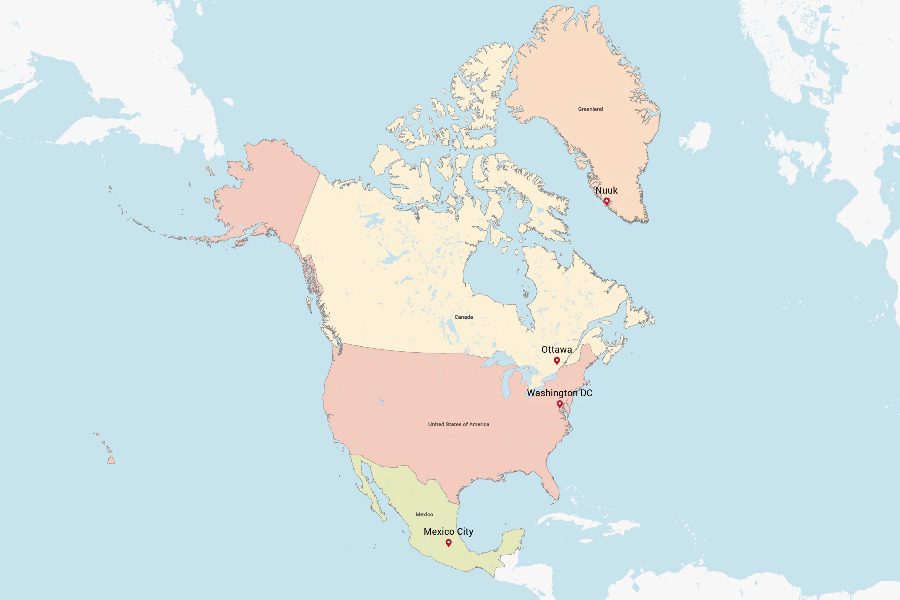 How many countries are in North America? USA, Canada and Mexico on the map Credit: Vector Maps

The continent of North America and South America merge together in the region commonly referred to as Central America. 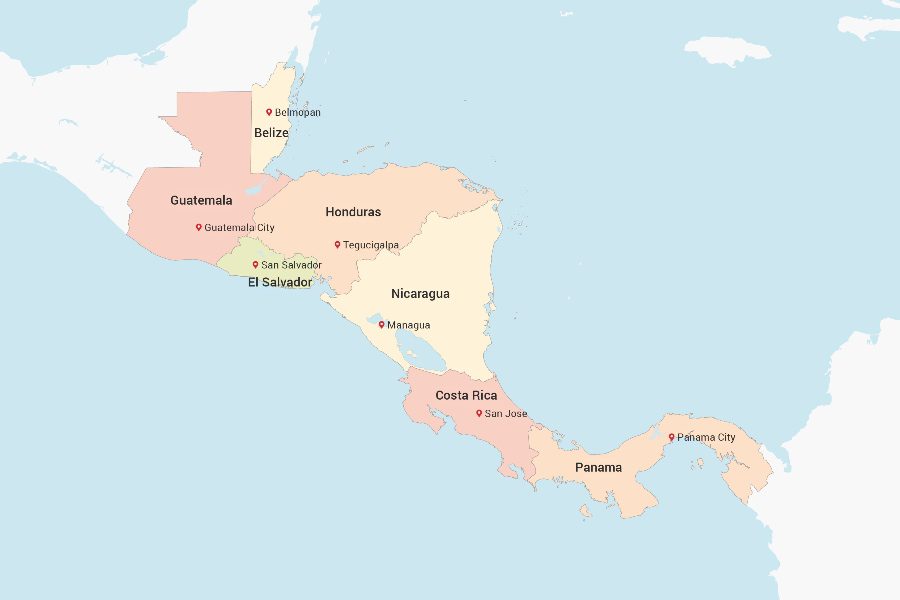 How many countries in North America are there? 7 Countries of Central America on the map. Credit: Vector Map

I have travelled the length of Central America overland, this journey involved everything from buses, chicken buses and even tricycles to cross borders! It was fun! And I travelled on a 25 USD per day budget!

I loved the region for all the food you can eat, from amazing dishes in Costa Rica to eating some new meals in Nicaragua.

How many countries in North America are there? So far we have 10 countries, but wait there is more! The Caribbean!

Yes, Caribbean countries do belong to the North American continent!

Ok, I admit. This was the strangest thing to get my head around it. Of course, I know that there are 7 continents in the world so the island countries need to belong somewhere! But as I was island hopping the Caribbean it felt different to my other experiences in North America.

So what are countries in the Caribbean that are considered countries of North America? 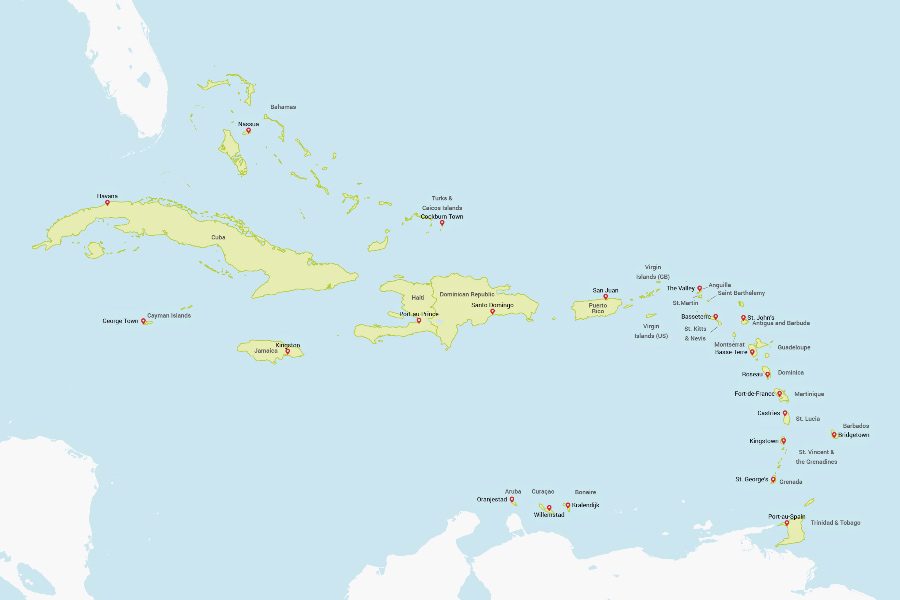 This adds up to 23 countries in North America. Did I miss any?

You might be thinking, wait where is Aruba, Puerto Rico or the Cayman islands? Well, these are not countries of the Caribbean and they don’t make the list of countries in North America either.

Why? Well, the Caribbean is a region with many islands that are overseas territories of other countries. In fact, there are many of them!

As the Caribbean was colonised by the Europeans, many islands are still overseas territories of other European countries. I guess for some islands it can provide an income for tourism and also they can tap into the national budget of the country they belong to.

Or they just never really had a chance to be independent! But I am sure there might be islands considering independence as many of the neighbouring countries have done. 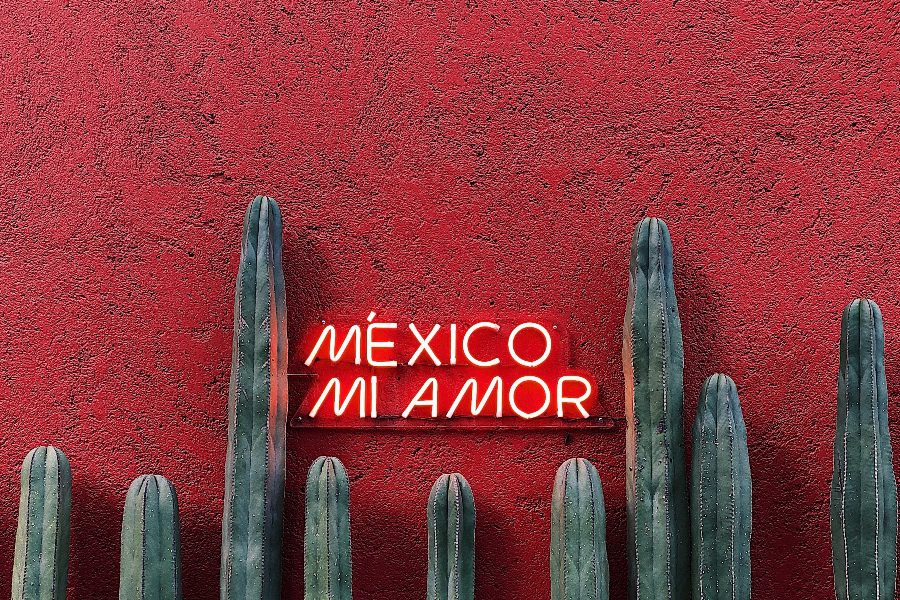 There are countless languages spoken in the countries of North America.

What are the languages spoken in North America?

And there you have it. There are 23 countries in North America in total, so let’s have a look at them in alphabetical order with flags, capital cities and the currency.

Here is a list of all 23 countries in North America

You might also be interested to find out how many countries in the world there are, the smallest countries in Europe or maybe this helpful blog can help you not to confuse Slovakia and Slovenia ever again.

Airalo is the largest eSIM store with eSIM plans for 190+ countries and regions worldwide. This eSIM allows you to get connected the moment you land at your destination and you can avoid those expensive data roaming charges. We LOVE this product!

If you enjoyed the debate on how many countries in North America are there, let us know in the comments below.

Some other posts you may enjoy reading: