Bhaktapur and Patan – 2 Ancient Cities Not to Miss in Nepal

It’s easy to stop in only the main cities when you visit a new country, but what about the places that are lesser-known? If you’re planning a trip to Nepal; are the cities of Bhaktapur and Patan included in your itinerary?

Many visitors travelling to Nepal only base themselves in the capital city of Kathmandu, paying little attention to the surrounding cities. Kathmandu has some fascinating temples and shrines, but we recommend that you take the time to explore a little further. 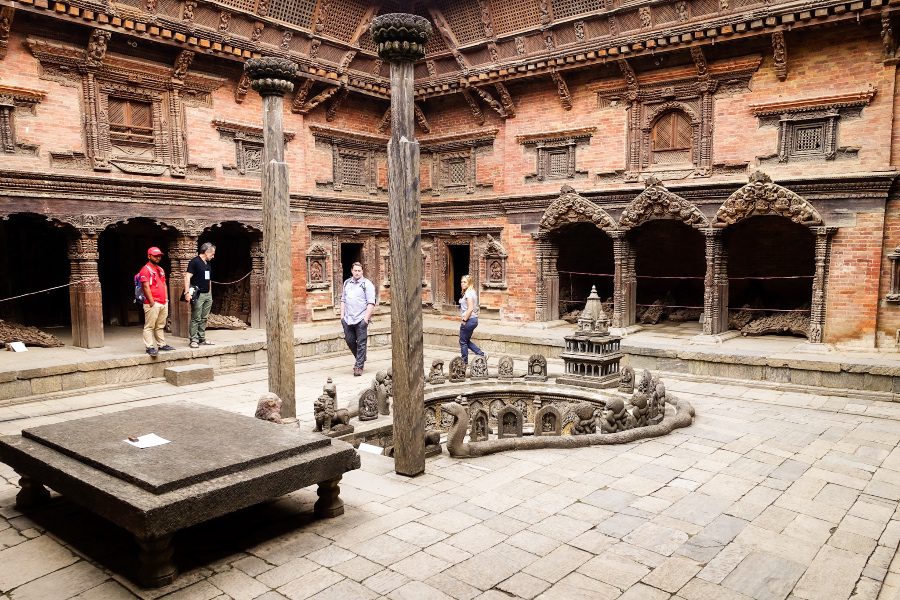 We loved exploring both cities Bhaktapur and Patan. Patan museum

Bhaktapur and Patan are two former kingdoms that are located quite near to Kathmandu and both are distinctly different from the other.

Nepal is one of our favourite countries to travel to. Above all, it’s the kind nature of the Nepalese people that drew us back to visit again during our mission to see the whole world.

We didn’t have as much time to spend in Nepal this time around, so we decided to spend 3 days in Chitwan National Park to experience wildlife viewing and enjoy the quieter pace of life in Nepal.

Returning to Kathmandu and with only a few days left in Nepal, we wanted to understand and learn more about Nepalese culture and that’s how the idea of a trip to Bhaktapur and Patan was born.

A friend recommended that we visit Bhaktapur and Patan, so we decided to join a small group day tour to include the highlights of both ancient cities.

Our guided tour to Bhaktapur and Patan

We made our way to a hotel centrally located in Thamel, the tourist district of Kathmandu. Greeting a handful of other travellers and meeting Kishor, our local guide, we were on our way!

Only 6km from Kathmandu is the city of Patan, which is often described as the city of living art. As we approached Durbar Square (literally meaning Palace Square), we could see why. The shrines and temples were hypnotizing.

We entered the Patan museum, which features some magnificent artifacts from both Hindu and Buddhist traditions. Kishor explained the span of civilizations that have thrived and competed here. I noticed the detailed carving and scriptures etched into the stone and woodwork inside this temple. Such precision and tonnes of patience must have been required for this.

Kishor explained how the royals used to reside here, back in the 16th century. He told stories and showed us the restored remains of the grand royal bathing area. This is where the king would take a bath. It was big enough for twenty people to bathe in, but I guess everything for the King was always on a grand scale.

We saw the rooms and courtyards where the Queen would store her royal gowns, shoes, jewels, and gifts from others. 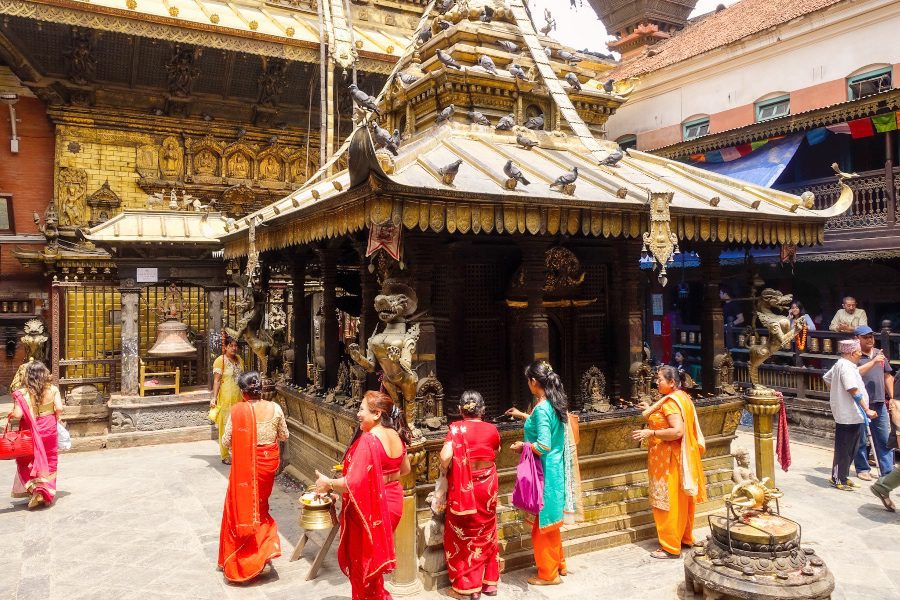 Visiting Bhaktapur and Patan – The Golden Temple in Patan

After exploring Patan, we jumped back into our private van and drove about forty-five minutes to the lively city of Bhaktapur.

Approaching the small city centre of Bhaktapur, I watched as the morning sun bounced off the walls of the temples. Street vendors peddled old wooden carts across the cobble-stoned ground, their carts full of fresh fruit and vegetables.

My eyes were drawn upwards as we found ourselves in front of the Nyatapola Temple. At 30 metres high, it soared above the market square. This is the iconic landmark and centre point of the city.

We could see that some daily offerings had already been made by the local people to either entice or ward off gods and demons. These offerings are typically small gifts of food and are often accompanied by sticks of burning sandalwood incense.

We climbed to the top for some fantastic views of the city below. It would be easy to sit there all day and watch the world go by. 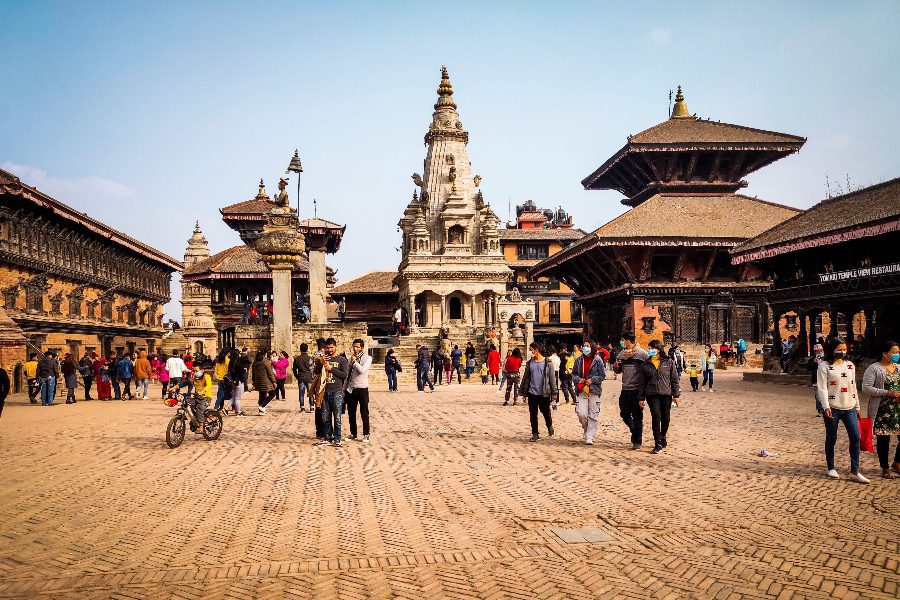 The city of Bhaktapur

Wandering through some small hidden alleyways; my nose led me toward a tiny hole in the wall kitchen. I peered inside to find a woman cooking a stack of fresh chapati bread and a big pot of the most vibrant and fragrant vegetable curry. She smiled at me as she bashed down and stretched more dough.

I’d describe both cities of Patan and Bhaktapur as beautiful outdoor museums. There are shrines and temples dotted everywhere. All of them are impressive and unique from the outside, yet the inside of the temples seem to tell all the stories. 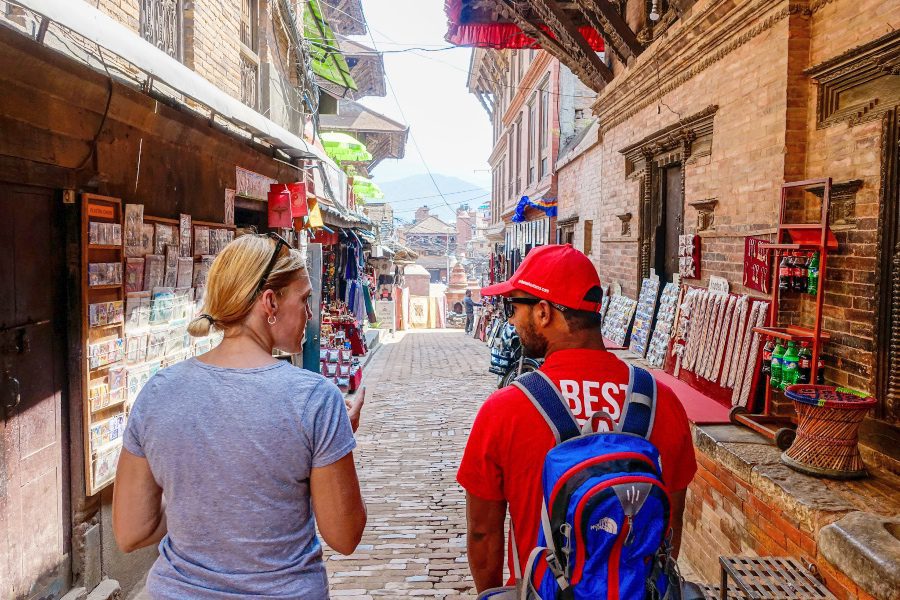 Exploring Bhaktapur and Patan with our guide

As I strolled along I realised that without Kishor, we’d never have found all these beautiful and hidden parts of these cities and he was essential to learn more about both, Bhaktapur and Patan. Perhaps that’s why getting off the beaten track with this local guided tour really can provide the best day ever. Make sure you visit Bhaktapur and Patan when in Kathmandu.

If you’re looking for an exciting evening in Kathmandu to complete an already awesome day – join the Rickshaw Explorer tour of Thamel & Durbar Square.

If you love to eat and you’re curious to learn how to make Nepalese food – we highly recommend joining this cooking class in Nepal.

Considering a trip to discover Tibet? Read our experience of this awesome overland trip Lhasa to Kathmandu – Everything you need to know. This trip runs in reverse and it is one of our favourite trips.

For our best advice and travel tips, head to our Travel Resources Page or read our 15 Expert Travel Tips from a lifetime of travelling the world.