9 Weird Drinks In The World That Will Surprise You

The world is an interesting place. Having travelled to over 185 countries, I’ve consumed a few weird drinks in the world during that time. There are many bizarre beverages around the globe, but I’ve chosen my top nine. Different cultures, people and resourceful ingredients make up this list. Some may shock you, some may even make you laugh. I admit that some of these weird drinks I’ve consumed in the world have made me gag.

Here are 9 weird drinks in the world that will surprise you: 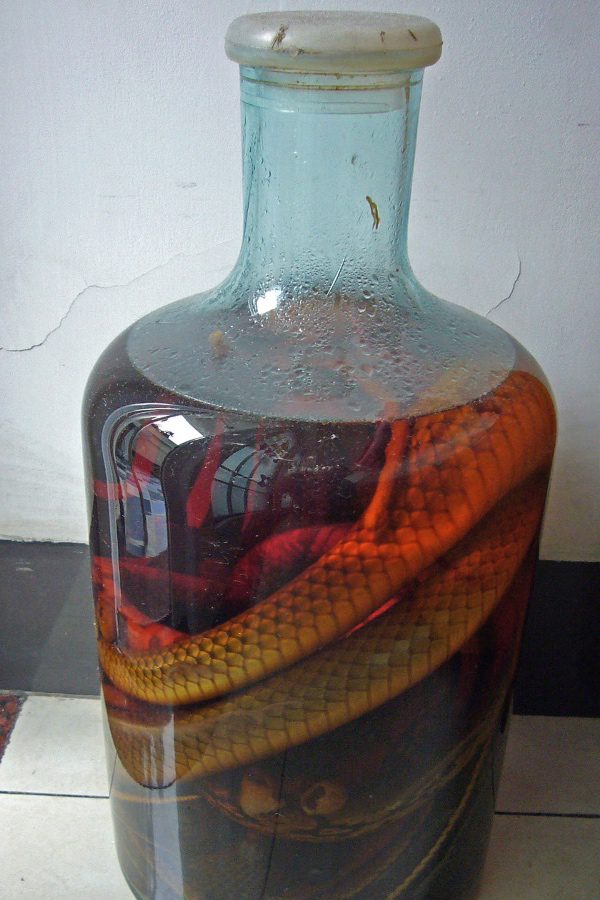 Travelled around South East Asia? If so, you’ve probably seen this. A huge jar of liquid sitting on a table with a big old snake curled up in it. The snake has been covered in rice wine or grain alcohol. It is left to ferment for as long as possible. What is the reason for this you ask?

In some cultures across Asia, this process is known to be an aphrodisiac. Furthermore, this preserved liquid has medicinal properties. This is definitely one of the weird drinks in the world as poisonous snakes are used to make this strange drink. The reptile has toxins that dissolve into the liquid.

My experience of drinking snake wine

This will give it that depth of flavour. The strong kick of flavour I’m talking about is the one that forces your eyes to slam shut and your mouth to curl. That’s the effect it had on me when I shot glass of snake wine somewhere in Vietnam. You can see why this beverage is on our list of weird drinks in the world.

Learn more about this alcohol aphrodisiac and why it can boost your sex drive here. 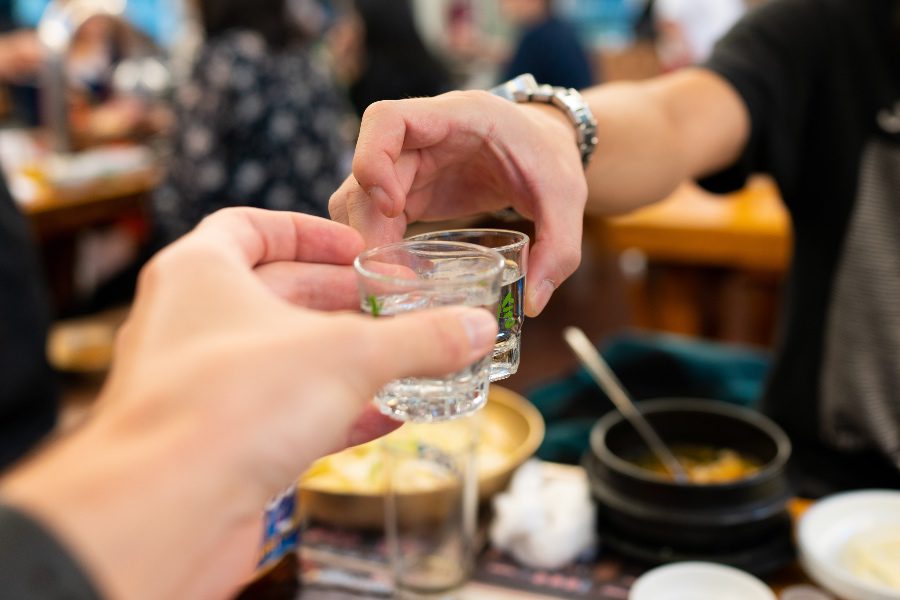 Soju is a clear, distilled rice wine. Soju can be also be produced using wheat, sweet potatoes and tapioca. Find it in every bar, restaurant and convenience store in South Korea. It’s commonly infused with fruit flavours such as cherry, blueberry or lemon.
And, sometimes, they mix it with the fluid from the eye of a tuna fish which naturally makes this a drink that must be included in the weird drinks around the world list.

The eye lens of the tuna is mashed. Then, it is mixed with soju. Did you know that fish eyes are packed full of vitamin E?

Other important nutrients such as gelatine and collagen are also present. One of those weird drinks in the world that improves your health perhaps?

After the fluid is combined with soju, the result is a jelly-like viscosity. To describe it in one word, salty! 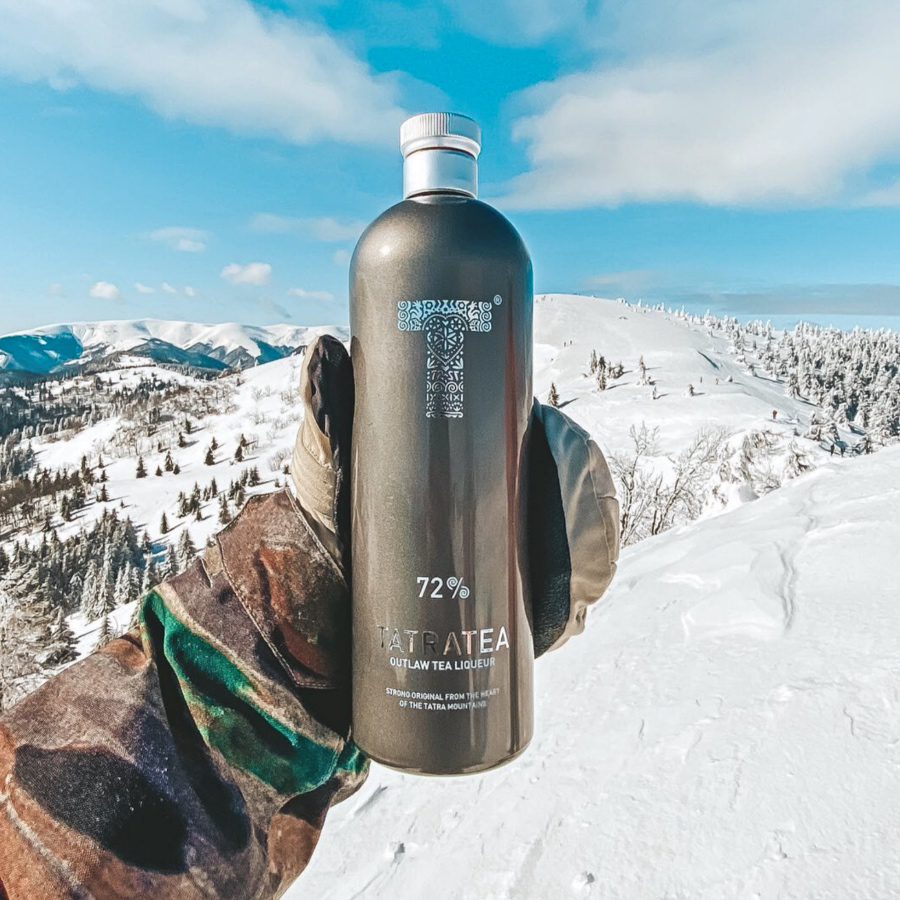 Eaten too much? If you’re travelling to Slovakia, it’s way too easy to do. What you need is the perfect digestive, Tatratea. Tatratea should probably feature on the must-try drinks list, not on the weird drinks in the world list.

Why is it so special? It has a range of different flavours starting from 22% of alcohol up to a whopping 72% of alcohol! Well, that’s really something. Slovaks are big tea drinkers and this classic Slovak liquor takes ‘tea’ to a whole new level.

So what is it? First, they brew black tea. Then they add herbs to spice it up. Finally, alcohol adds the punch and cane sugar makes it sweeter. And the unique ingredients? Springwater from nearby Tatra mountains.

There are a variety of flavours available and the bottles have a really nice design. However, my favourite is the ‘original’ which is 52% of alcohol and perfect for wintertime. Tasting notes of ginger, cinnamon and liquorice are the perfect digestive after I’ve eaten my favourite Slovak meal, halusky.

But Tatratea can be consumed in a number of ways. Hot, at room temperature or as an iced shot. And they make pretty epic cocktails with it too. 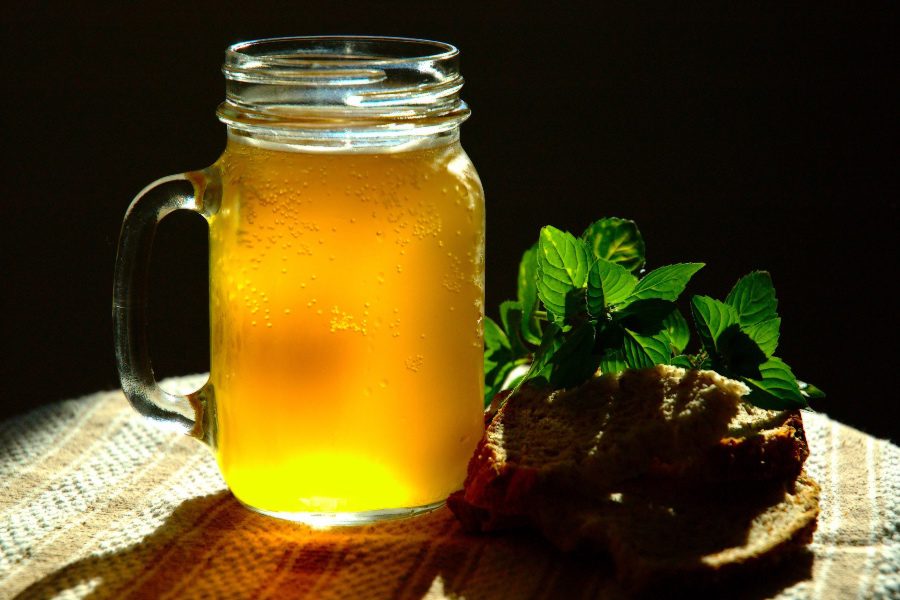 A drink that originates in Russia, and is usually consumed during the Summer.

This is one of the weird drinks in the world for sure as it consists of rye bread and it is also known as fermented black. The resulting colour of kvass depends on the colour of the bread used. This drink is as popular as vodka in this country.

Both of these drinks are made from bread, however, only one of them will get you quite drunk after a few shots. Can you guess which one? 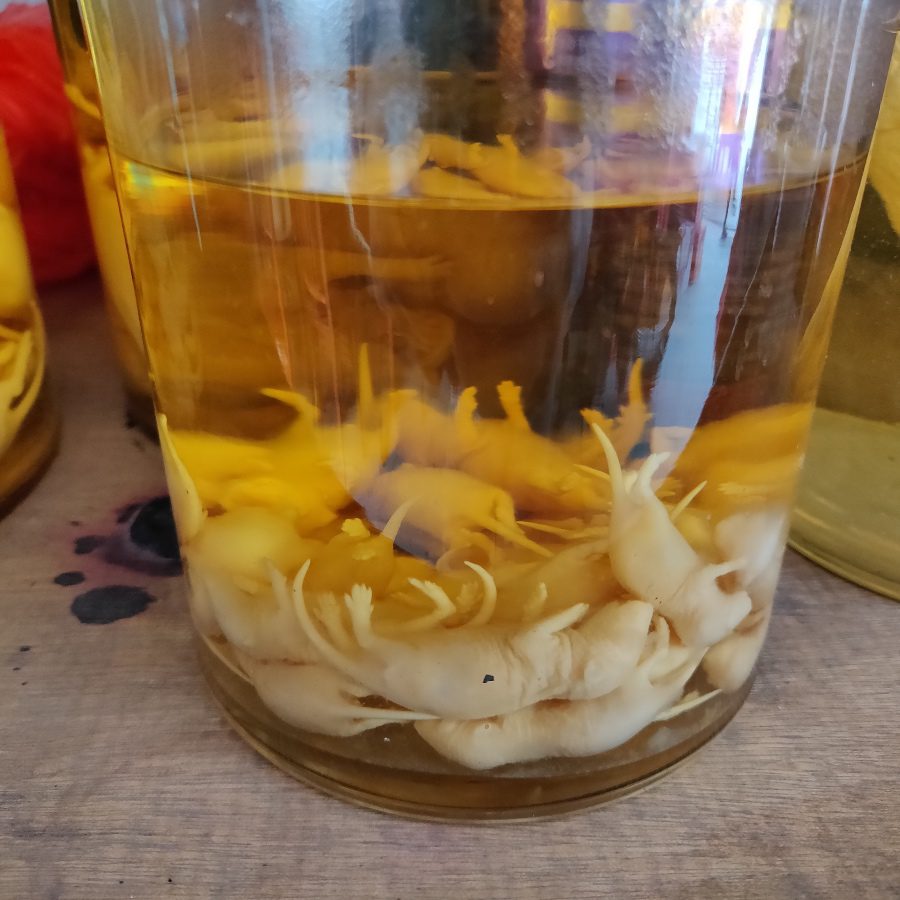 In ancient times, you had to be resourceful to deal with the disease. If you couldn’t find the money to buy medicine to treat illness, the locals had to improvise.

Baby mice wine was their go-to treatment. This strange drink has multiple healing properties. These include curing asthma. In addition, it also rids the body of liver disease.

Here is why this one is on our weird drinks in the world list. Firstly, take a handful of baby mice. Then drown them in rice wine. Lastly, let it ferment for 1-2 years. The aim is to achieve the strongest rodent flavour possible. Apparently the stronger the flavour, the more disease it fights out of the body.

Similar to most any other fermentation process, the result is an alcoholic liquid. If I’m being honest, I’d have to be blind drunk already to try baby mice wine – definitely one of the weird drinks in the world. Wouldn’t you?

If tasting weird foods interests you, you should read our post – the 10 most bizarre foods to eat in China. 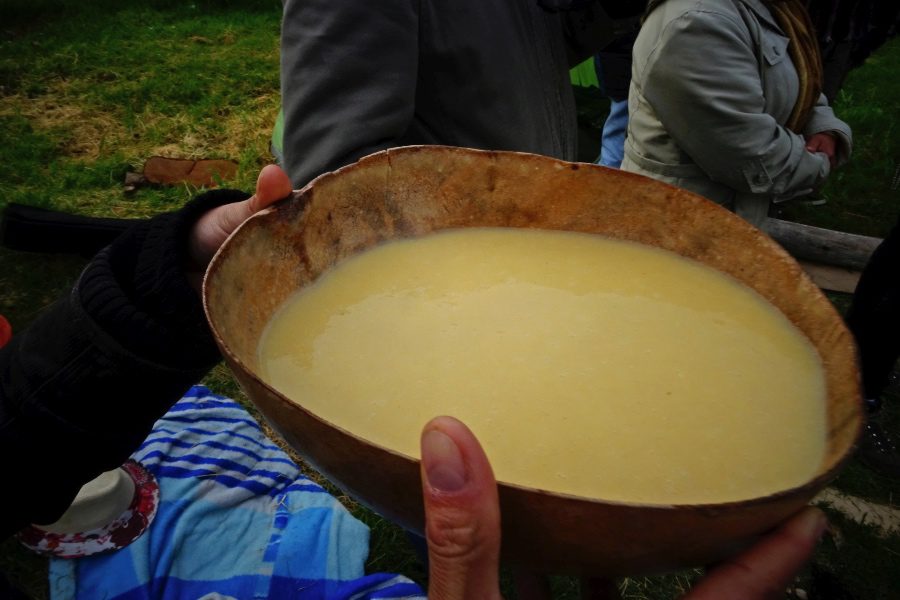 Chicha, also known as corn beer has been around a long time. It has been also associated with the Incan Civilisation. That’s a long time ago! This drink was originally consumed at festivals and during sacrificial rituals.

Firstly, they extract sugar from corn, then boil it. And lastly, they ferment it. This happens over several days. The liquid ferments in huge vessels. This process is similar to the modern-day production of beer. Of course, back in those days, the equipment on hand was much limited. However, if we’ve discovered anything about the Incas, it’s that they were incredibly clever people.

The taste of chicha is similar to kombucha. A mellow taste with nutty tones. Put this weird drink in the world on your list if you travel to Peru. 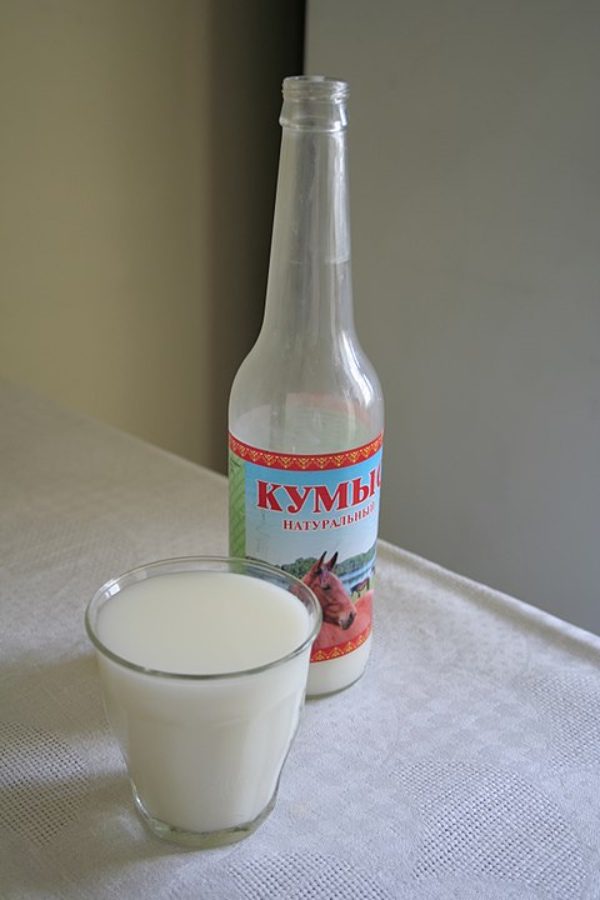 The recipe to make kumis is this. Firstly, take the milk from a mare or donkey. Then ferment it for many hours or even days. This results in a drink that tastes sour, and a little tart. Kumis is a good source of calcium. For nomads or people living in the countryside of Central Asia, kumis is vital to their lifestyle of living off the land. 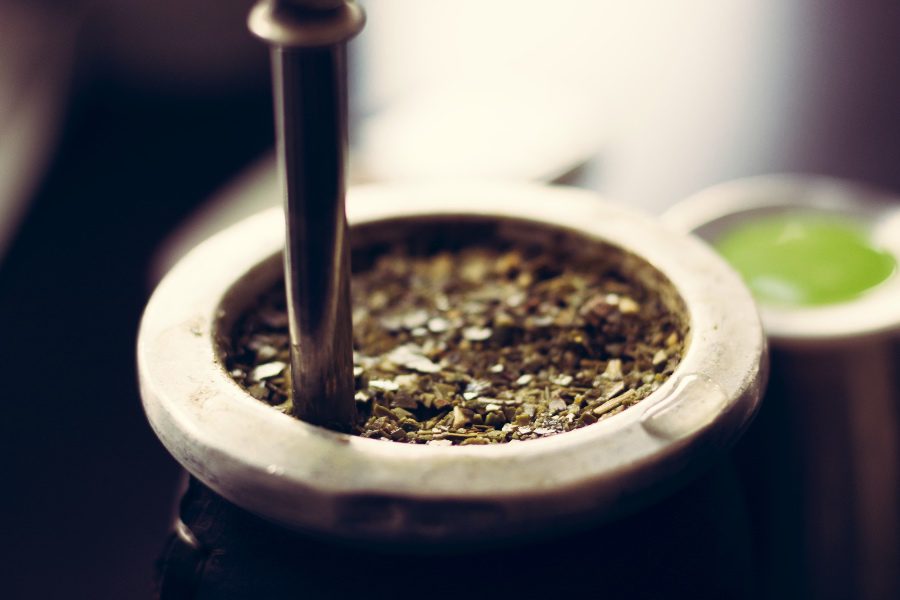 You will see people sipping on this drink everywhere. It is a traditional South American drink, and extremely popular in Argentina. Furthermore, you can also find it in Uruguay, Paraguay, Chile, Brazil, and Bolivia. This caffeine-rich infused drink is made from dried leaves called yerba mate.
Yerba mate leaves are dried and chopped. Then they are ground into a powder and finally hot water is added to create this popular drink.

Is this the best drink of all weird drinks in the world? How exactly do you consume mate?

You drink it through a metal straw known in Argentina as a bombilla. But it can sometimes have a different name depending on what country you’re in. The bombilla also acts as a sort of sieve to filter rogue particles of dried leaves.
In Argentina, Mate also has a ritual attached to it. Most importantly, people drink it in social settings on family special occasions or with friends. The mate cup and the bombilla are shared between everyone. 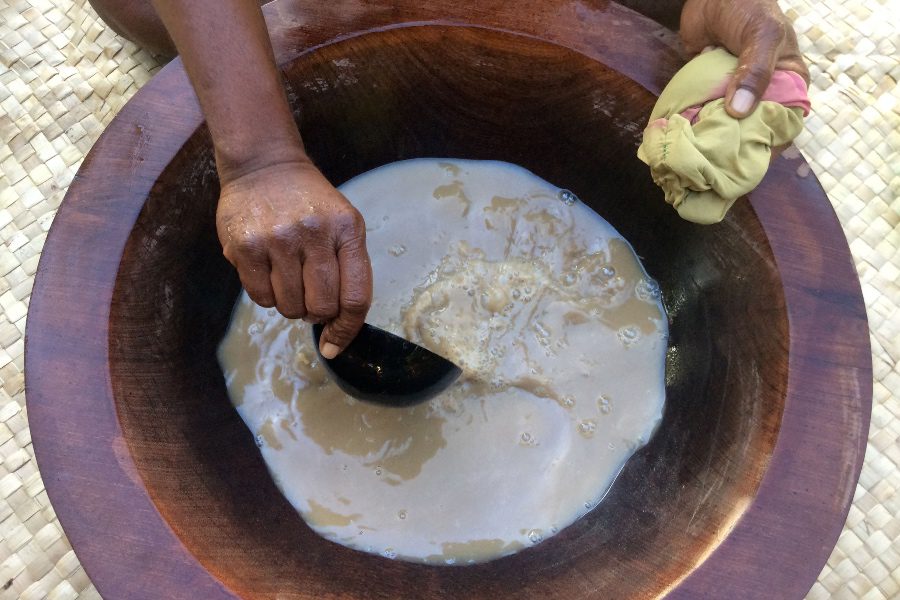 If you get the chance to attend a kava ceremony in Fiji, you’ll have the opportunity to try kava. Similarly, you may be able to taste it from a local bar in a small village. The latter is how I experienced my first taste of kava. Served to me in a half coconut shell (the perfect island cup). My first impression? Well, it looked like a cup of muddy water. The initial taste was just that. Kava is earthy and bitter with some gritty textures and peppery flavours.

Instantly, it gave me a numb tongue and lips. Of course, I finished the cup. Naturally, I didn’t want to offend the host. Yet, my brain was screaming at me to stop. I clearly didn’t enjoy this strange beverage at the time and would agree with the fact that it is one of the weird drinks in the world that seems to be totally normal for locals to drink. Why would anyone voluntarily drink this?
Minutes later, a sense of calm crept over me. I enjoyed the mellow feeling that took over my entire body. I felt like I didn’t have a care in the world and I felt very happy.

Why did I feel so mellow afterwards?

Kava is a psychoactive drink, made from a plant grown called kava. The drink is made using the root of the plant. Firstly, you take the root of the plant and pound it hard into a powder. Then you add water. Simple. And this drink has been around for centuries. It has euphoric and anti-anxiety effects, which explains the mellow feeling of my experience.
There is a ban on Kava in some countries due to the side effects it has on people who partake, but perhaps take too much. Read more in this interesting article for more details.

So how many of these would you try? What weird drinks in the world would you add to our list? Let us know in the comments below.